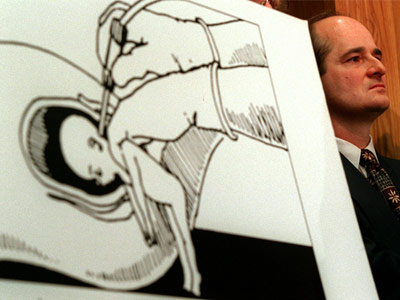 Rep. Charles Canady of Florida stands next to a poster illustrating the dilation and extraction method in 1995.
Associated Press/Greg Gibson

Sometimes, after completing a vacuum extraction, the person performing the abortion may need to use a curette to scrape the remaining fetal tissue from the uterus. A curette is a long, thin instrument with a serrated spoon at one end. When a curette is used, the procedure is typically referred to as dilation and curettage, or D&C (D&C is also used therapeutically to resolve issues such as abnormal vaginal or uterine bleeding). Vacuum extractions can usually be performed up to 16 weeks after a woman's last period when combined with D&C.

Statistically, abortions carried out more than 16 weeks after a woman's last period are rare, but they may be performed with a method known as dilation and evacuation, or D&E. This technique combines all the methods that went before, including aspiration and curettage, but it requires additional surgical instruments since the fetus is more developed. Often, the person performing the abortion will administer a shot to the fetus through abdominal tissue to ensure that the fetus is dead. Then medication is given to the woman, and, as with the other methods, the woman's cervix is stretched with dilators.

The fetal tissue is extracted to the degree possible with vacuum extraction and curettage, but since the fetus is likely too large at this point to be completely removed in this way, the person providing the abortion will insert forceps into the woman's vagina and crush the fetus's head. This allows the fetus to be broken down into pieces that allow for easy removal. The person administering the abortion then examines the fetal tissues and fragments to ensure that the entire fetus was removed.

Dilation and evacuation is different from a method known as dilation and extraction because the fetus is dead before leaving the woman's body. In the dilation and extraction method, also known as a partial birth abortion, the fetus is partially delivered vaginally in a feet-first position. When the fetus is partially expelled, the abortion provider makes a hole at the base of the fetal skull, inserts tubing, and uses suction to pull out the brain of the fetus. When the skull collapses, the fetus can be fully expelled. In the U.S., this method has been banned except for purposes of protecting a woman's health, such as in the case of an infected uterus or a heart condition [source: Gawande].

Very rarely, an induction abortion may be used to end a late-term pregnancy. In this instance, a saline solution is administered to start early labor. The fetus is delivered intact. This method might be used in the case of abnormal fetal development or antenatal diagnosis of a genetic disorder, so that an autopsy can be performed on the fetus.

On the next page, we'll look at the recovery process after an abortion.