by the Editors of Publications International, Ltd. & Clint Pumphrey
Prev NEXT
4 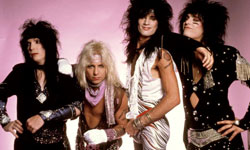 If '70s bands had long hair, then '80s bands had big hair. At least that was the style for hair metal bands, whose flamboyant fashion and hard rock sound emerged from the music scene on the Los Angeles Strip. Groups like Van Halen, Twisted Sister, Motley Crue and Def Leppard rocked the 1980s with more power chords and monster ballads than you could wave a Bic lighter at. And while their extensive use of spandex, hairspray and makeup may have suggested femininity, don't be fooled: In the end it was all about raunchy lyrics, freeflowing booze and backstage flings.

By the early 1990s, hair metal music lost much of its popularity thanks to the newly-minted grunge bands like Nirvana, and never really recovered. Today, many of these acts are limited to the stages of state fairs and casinos, but their epic guitar solos and in-your-face sexuality won't soon be forgotten. In fact, hair metal is currently the subject of a popular Broadway musical, "Rock of Ages," where scantily clad women walk the aisles selling drinks and each audience member gets a disposable flashlight to wave during the power ballads.