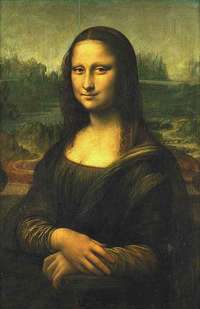 The "Mona Lisa" was stolen by an employee of the Louvre.

Some people just can't keep their hands off other people's things -- even the world's greatest art. Art thieves take their loot from museums, places of worship, and private residences. Because they would have trouble selling the fruits of their labor on the open market -- auction houses and galleries tend to avoid stolen works -- art burglars often either keep the art for themselves or try to ransom the hot property back to the original owner. Among the major robberies in the past hundred years are these daring thefts of very expensive art (values estimated at the time of the theft).

Two men dressed as police officers visited the Isabella Stewart Gardner Museum in the wee hours of the morning. After overpowering two guards and grabbing the security system's surveillance tape, they collected Rembrandt's only seascape, "Storm on the Sea of Galilee," as well as Vermeer's "The Concert, Manet's Chez Tortoni," and several other works. Authorities have yet to find the criminals despite investigating everyone from the Irish Republican Army to a Boston mob boss!

Two armed and masked thieves threatened workers at the Munch Museum during a daring daylight theft. They stole a pair of Edvard Munch paintings, "The Scream" and "The Madonna," estimated at a combined value of 100 million euros. In May 2006, authorities convicted three men who received between four and eight years in jail. The paintings were recovered three months later.

In the world's most notorious art theft to date, Vincenzo Peruggia, an employee of the Louvre, stole Leonardo da Vinci's "Mona Lisa" from the storied museum in the heart of Paris. Peruggia simply hid in a closet, grabbed the painting once alone in the room, hid it under his long smock, and walked out of the famed museum after it had closed. The theft turned the moderately popular "Mona Lisa" into the best-known painting in the world. Police questioned Pablo Picasso and French poet Guillaume Apollinaire about the crime, but they found the real thief -- and the Mona Lisa -- two years later when Peruggia tried to sell it to an art dealer in Florence.

Read about more outrageous art thefts on the next page.

These notorious art thefts, as well as the ones on the previous page, involve some of the most valuable works of art in the world.

"The Scream" has been a popular target for thieves in Norway. On the day the 1994 Winter Olympics began in Lillehammer, a different version of Munch's famous work (he painted four) was taken from Oslo's National Art Museum. In less than one minute, the crooks came in through a window, cut the wires holding up the painting, and left through the same window. They attempted to ransom the painting to the Norwegian government, but they had left a piece of the frame at a bus stop -- a clue that helped authorities recover the painting within a few months. Four men were convicted of the crime in January 1996.

Blending in apparently has its advantages for art thieves. Two men joined a tour of Scotland's Drumlanrig Castle, subdued a guard, and made off with Leonardo da Vinci's "Madonna of the Yarnwinder." Alarms around the art were not set during the day, and the thieves dissuaded tourists from intervening, reportedly telling them: "Don't worry . . . we're the police. This is just practice." The painting was recovered in 2007, but the crafty thieves remain unidentified.

Caught! Eight criminals each got up to six and half years behind bars for conspiring to take a Rembrandt and two Renoirs -- all of them eventually recovered -- from Stockholm's National Museum. You have to give the three masked men who actually grabbed the paintings credit for a dramatic exit. In a scene reminiscent of an action movie, they fled the scene by motorboat. Police unraveled the plot after recovering one of the paintings during an unrelated drug investigation four months after the theft.

Robbers used a ladder to get onto the roof of the Van Gogh Museum, then broke in and stole two of the Dutch master's paintings, "View of the Sea at Scheveningen" and "Congregation Leaving the Reformed Church in Nuenen," together worth $30 million. Police told the press that the thieves worked so quickly that, despite setting off the museum's alarms, they had disappeared before police could get there. Authorities in the Netherlands arrested two men in 2003, based on DNA from hair inside two hats left at the scene, but they have been unable to recover the paintings, which the men deny taking.