by the Editors of Publications International, Ltd. & Laurie L. Dove
Prev NEXT
3

Rasputin and the Romanovs 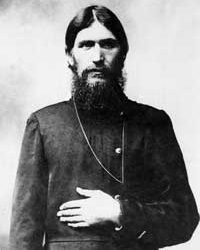 A portrait taken in 1900 of Rasputin failing entirely to not look sinister.
Time & Life Pictures/Getty Images

Rasputin, a self-proclaimed magician and cult leader, wormed his way into the palace of the Romanovs, Russia's ruling family, around the turn of the last century. He did so by telling stories to the heir to the throne, a boy named Alexis. His stories kept Alexis calm and sedate. This was important to the royal family because Alexis had hemophilia, which could have caused him to bleed to death if he were injured. Rasputin's power, however, soon went to his head, and a few of the Romanovs allegedly decided to have him killed. But he was exceptionally resilient.

Reportedly it took poison, a fall down a staircase, repeated gunshots and drowning before Rasputin was finally dead. It's said that Rasputin mumbled a curse as he died, assuring Russia's ruling monarchs that they would all be dead themselves within a year. The Romanov family was brutally murdered in a mass execution less than a year later [source: Rhodes].

Our list of famous curses continues on the next page with curses that have haunted American presidents.