by the Editors of Publications International, Ltd. & Laurie L. Dove
Prev NEXT
4

The Curse of Turan 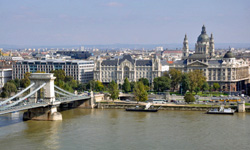 Hungary's capital, Budapest. A nice place to visit, but should you happen to have a time machine, you might not want to go live there between 1000 and 2000 A.D.
iStockphoto/Thinkstock

If you believe in curses, you should also hope your family didn't originate from Hungary. This country is home to the Curse of Turan, which posits that Hungary and its people have been oppressed by a malevolent spell for centuries. The trouble started in 1000 A.D. when then-despot King Stephen decreed that his people must convert to Christianity. Not all the country's inhabitants met the news with a willing spirit, though. A shaman, believed to have psychic powers because he was born with six fingers on one hand, resisted the orders to leave the old religious ways behind. In protest, the shaman placed a thousand-year curse on all Hungarians.

In the years that followed, Hungary was on the wrong side of several state decisions -- like supporting the Nazis and then being persecuted by German forces anyway [source: Benninghof]. Its people are also believed by some to have experienced increased levels of personal despair and misfortune. As proof, some point to Hungary's inflated suicide rate. During much of the 20th century, the country had one of the highest suicide rates in the world [source: Lester]. But since the 1,000 year mark has passed, perhaps the curse has passed with it.