by the Editors of Publications International, Ltd. & Laurie L. Dove
Prev NEXT
7 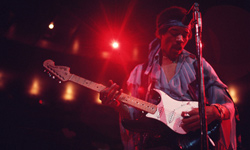 Hendrix performs at the Felt Forum in January of 1970, the year of his death.
Walter Iooss Jr./Getty Images

If you're a rock star and you're about to turn 27, you might want to consider taking a year off to avoid membership in "The Club." Trust us: This is an exclusive club that you won't want to join. Take Robert Johnson, for example. Johnson, who Eric Clapton called "the most important blues musician who ever lived," played the guitar so well that some said he must have made a deal with the devil. So when he died at 27, folks said it must have been time to pay up.

Since Johnson, a host of musical geniuses have gone to an early grave at age 27. Brian Jones, founding member of the Rolling Stones, died at age 27 in 1969. Then it was both Jimi Hendrix and Janis Joplin in 1970, and Jim Morrison the following year. Kurt Cobain joined The Club in 1994, and so did Amy Winehouse in 2011 [source: Grant]. All 27 years old. Is it a coincidence? A tragic combination of fame, addiction and depression at a young age? Or were these musical geniuses paying debts, too?