by the Editors of Publications International, Ltd. & John Kelly
Prev NEXT
3 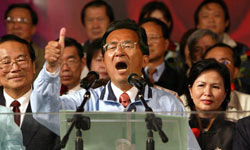 Former Taiwanese President Chen Shui-bian won re-election in 2004, but resigned after he was accused of misusing his authority.
Paula Bronstein/Getty Images News/Getty Images

Chen Shui-bian was a Taiwanese politician who rose from poverty to power in his country. The populist Chen was a reformer and a great showman known by his nickname A-bian. In 2000, his opposition group ousted the Kuomintang, the party which had ruled Taiwan since it was exiled from mainland China in 1949. As president, Chen opposed the strengthening of ties with China's government and flirted with the idea of declaring Taiwan independent from the mainland.

Chen won reelection in 2004, but the scandals began in 2006. First, his son-in-law was accused of insider trading. The same year, his wife was charged with corruption and forgery. It was proven that she had wired $21 million in campaign funds to banks in Singapore, Switzerland and the Cayman Islands. There were charges that Chen himself had misused his authority; his opposition tried unsuccessfully to mount an effort to recall him from position. Under the law, he couldn't be prosecuted while in office.

The scandal continued to build, and Chen resigned in August 2008. He was arrested six months later for embezzling $3.15 million of public funds and taking $9 million in bribes. A court convicted him in 2009. He and his wife were both sentenced to life in prison and fined a total of $15 million. Their sentences were later reduced to 20 years. The promising career of A-bian was over.

Sexual misbehavior has been the downfall of many a politician, as we'll see in our next scandal.