by the Editors of Publications International, Ltd. & John Kelly Sep 16, 2007
Prev NEXT
5 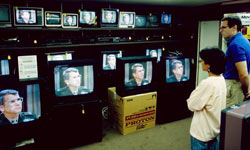 On July 8, 1985, President Ronald Reagan told the American Bar Association that Iran was part of a "confederation of terrorist states." He failed to mention that members of his administration were secretly planning to sell weapons to Iran to facilitate the release of U.S. hostages held in Lebanon by pro-Iranian terrorist groups.

Profits from the arms sales were secretly sent to Nicaragua to aid rebel forces, known as the contras, in their attempt to overthrow the country's democratically elected government. The incident became known as the Iran-Contra Affair and was the biggest scandal of Reagan's administration.

The weapons sale to Iran was authorized by Robert McFarlane, head of the National Security Council (NSC), in violation of U.S. government policies regarding terrorists and military aid to Iran. NSC staff member Oliver North arranged for a portion of the $48 million paid by Iran to be sent to the contras, which violated a 1984 law banning this type of aid. North and his secretary Fawn Hall also shredded critical documents.

President Reagan repeatedly denied rumors that the United States had exchanged arms for hostages but later stated that he'd been misinformed. He created a Special Review Board to investigate. In February 1987, the board found the president not guilty. Others involved were found guilty but either had their sentences overturned on appeal or were later pardoned by President George H. W. Bush.

Our next scandal involved more than one famous name. Read on.