by the Editors of Publications International, Ltd. & John Kelly
Prev NEXT
9 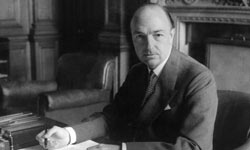 This scandal had everything: sex, spies, state secrets and embarrassing revelations about the British upper crust. It erupted in 1963, when the Cold War was at its most frigid.

The trouble had begun two years earlier when British nobleman Lord Astor invited osteopath Stephen Ward to a party at his country estate. Ward brought along a friend, 19-year-old Christine Keeler, and some other young women. When Keeler went for a nude swim in Astor's pool, she attracted the eye of another guest at the party, John Profumo, who happened to be Secretary of State for War in the Conservative Party government of Prime Minister Harold Macmillan. Profumo started an affair with Keeler, who was also dating Eugene Ivanov, a Russian naval attaché and possible Soviet spy.

Later, when one of Keeler's other boyfriends caused a violent ruckus, reporters got interested, and the story began to come out. Profumo was questioned about the affair in the House of Commons and denied any improper involvement with Keeler. But British newspapers kept on the scent and the truth came out. Profumo finally confessed and resigned in disgrace. Although there was no evidence that secrets had been compromised, Macmillan stepped down a few months later for health reasons. In 1964, the Conservatives lost a close election to the Labour Party, ending their 12-year reign. In a tragic twist to the affair, while the scandal still simmered Keeler and Ward were jailed for perjury and sex offenses. Ward committed suicide during his trial in August 1963.

Our next scandal was tragic from the beginning.