6 of the World's Greatest Missing Treasures

Browse the article 6 of the World's Greatest Missing Treasures 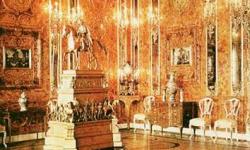 The Amber Room was reassembled by the Germans in the Königsberg Castle during WWII.
Publications International, Ltd.

They were fantastic examples of opulence, decadence, and splendor. People marveled at their beauty, drooled over their excess, and cowered at their power. And now they're gone.

But where are they? And what happened to them? Explore our list of six of the world's greatest missing treasures. We'll start with one that would be worth an estimated $142 million today.

Described as the eighth wonder of the world by those who saw it, the Amber Room is certainly the most unique missing treasure in history.

It was an 11-foot-square hall consisting of large wall panels inlaid with several tons of superbly designed amber, large gold-leaf-edged mirrors, and four magnificent Florentine mosaics. Arranged in three tiers, the amber was inlaid with precious jewels, and glass display cases housed one of the most valuable collections of Prussian and Russian artwork ever assembled.

Created for Prussia's King Friedrich I and given to Russian czar Peter the Great in 1716, it was located at Catherine Palace, near St. Petersburg. Today, the Amber Room would be valued at more than $142 million.

When Adolf Hitler turned his Nazi war machine toward Russia, the keepers of the Amber Room got nervous. They tried to move it, but the amber began to crumble, so they tried to cover it with wallpaper. They were unsuccessful and when the Nazis stormed Leningrad (formerly called St. Petersburg) in October 1941, they claimed it and put it on display in Königsberg Castle during the remaining war years.

However, when Königsberg surrendered in April 1945, the fabled treasure was nowhere to be found. The Amber Room was never seen again. Did the Soviets unwittingly destroy their own treasure with bombs? Was it hidden in a now lost subterranean bunker outside the city? Or was it destroyed when Königsberg Castle burned shortly after the city surrendered?

We'll probably never know for sure. But fortunately for lovers of opulence, the Amber Room has been painstakingly recreated and is on display in Catherine Palace.

The famous pirate Blackbeard only spent about two years (1716-1718) plundering the high seas. Within that time, however, he amassed some serious wealth. While the Spanish were busy obtaining all the gold and silver they could extract from Mexico and South America, Blackbeard and his mates waited patiently, then pounced on the treasure-laden ships as they sailed back to Spain.

Blackbeard developed a fearsome reputation as a cruel and vicious opportunist. His reign of terror centered around the West Indies and the Atlantic coast of North America, with headquarters in both the Bahamas and North Carolina. His end came in November 1718, when British Lieutenant Robert Maynard decapitated the pirate and hung his head from the bowsprit of his ship as a grisly trophy.

But what happened to the vast treasure that Blackbeard had amassed? He acknowledged burying it but never disclosed the location. But that hasn't stopped countless treasure hunters from trying to get their hands on it.

Blackbeard's sunken ship, Queen Anne's Revenge, is believed to have been discovered near Beaufort, North Carolina, in 1996, but the loot wasn't onboard. Possible locations for the hidden stash include the Caribbean Islands, Virginia's Chesapeake Bay, and the caves of the Cayman Islands.

In 1820, Lima, Peru, was on the edge of revolt. As a preventative measure, the viceroy of Lima decided to transport the city's fabulous wealth to Mexico for safekeeping. The treasures included jeweled stones, candlesticks, and two life-size solid gold statues of Mary holding the baby Jesus. In all, the treasure filled 11 ships and was valued at around $60 million.

Captain William Thompson, commander of the Mary Dear, was put in charge of transporting the riches to Mexico. But the viceroy should have done some research on the man to whom he handed such fabulous wealth because Thompson was a pirate, and a ruthless one at that. Once the ships were well out to sea, he cut the throats of the Peruvian guards and threw their bodies overboard.

Thompson headed for the Cocos Islands, in the Indian Ocean, where he and his men allegedly buried the treasure. They then decided to split up and lay low until the situation had calmed down, at which time they would reconvene to divvy up the spoils.

But the Mary Dear was captured, and the crew went on trial for piracy. All but Thompson and his first mate were hanged. To save their lives, the two agreed to lead the Spanish to the stolen treasure. They took them as far as the Cocos Islands and then managed to escape into the jungle. Thompson, the first mate, and the treasure were never seen again.

Since then more than 300 expeditions have tried -- unsuccessfully -- to locate the treasures of Lima. The most recent theory is that the treasure wasn't buried on the Cocos Islands at all but on an unknown island off the coast of Central America.

On the next page, you will find the Pharaohs' missing treasure.

When Howard Carter found the tomb of Tutankhamen in Egypt's Valley of the Kings in 1922, he was mesmerized by the splendor of the artifacts that the young king took to the afterlife. Attached to the burial chamber was a treasury with so many jewels and other artifacts that it took Carter ten years to fully catalog them.

However, when the burial chambers of more prominent pharaohs were unearthed in the late 19th century, their treasure chambers were virtually empty. It is common knowledge that tomb robbers had been busy in the tombs over the centuries, but the scale of the theft required to clean out the tombs of the kings is beyond petty criminals. So, where is the vast wealth of the pharaohs buried in the Valley of the Kings?

Some scholars believe that the treasures were appropriated by the priests who conducted reburials in the Valley of the Kings during the period of the early 20th and late 21st Egyptian dynasties (425-343 B.C.). Pharaohs were not averse to reusing the funeral splendors of their ancestors, so this may have been carried out with official sanction.

One particular ruler, Herihor, has been the focus of special attention. Herihor was a high court official during the reign of Ramses XI. Upon Ramses' death, Herihor usurped the throne, dividing up the kingdom with a co-conspirator, his son-in-law Piankh. Herihor placed himself in charge of reburial proceedings at the Valley of the Kings, affording himself ample opportunity to pilfer on a grand scale.

His tomb has never been found. When and if it is, many scholars believe that the missing treasures of many of Egypt's pharaohs will finally see the light of day.

On the next pages, you will find more of the world's greatest missing treasures, including the Ark of the Covenant.

The Ark of the Covenant

To the ancient Israelites, the Ark of the Covenant was the most sacred thing on Earth. The central and paramount object of the Hebrew nation, this ornate chest was, according to the Bible, designed by God.

Measuring 44 inches long, 26 inches wide, and 26 inches high, the chest was made of acacia wood, overlaid inside and out with pure gold, and surrounded by an artistic gold border. Mounted on the solid gold cover were two golden cherubs, one at each end of the cover facing each other, with heads bowed and wings extending upward.

The Ark served as a holy archive for the safekeeping of sacred relics, including the two stone tablets of the Ten Commandments. As a historical and religious treasure, the Ark and its contents were absolutely priceless.

In 607 B.C., Jerusalem, the capital city of the Israelite kingdom of Judah and home of Solomon's Temple, where the Ark was housed, was besieged and overthrown by the Babylonians. In a terrible slaughter, more than a million people were killed, with the survivors driven off into captivity.

Seventy years later, when the Israelites returned to rebuild the city, the Ark of the Covenant was gone. What happened to this priceless relic has been the subject of intense speculation ever since.

It is widely believed that the Ark was hidden by the Hebrews to keep it from the Babylonians. Possible locations for its hiding place range from Mount Nebo in Egypt to Ethiopia to a cave in the heart of Judah. Yet, if the Ark was hidden, why was it not recovered when the Israelites returned to Jerusalem and rebuilt the temple?

Others believe that the Ark was destroyed by the rampaging Babylonians. Still another explanation put forth by the faithful is that God miraculously removed the Ark for safekeeping by means of divine intervention.

The Spanish decimation of the Aztec empire in Mexico came to a head on July 1, 1520. After mortally wounding Emperor Montezuma, Hernando Cortés and his men were besieged by enraged Aztec warriors in the capital city of Tenochtitlán.

The terrified army had thrown the booty away in a vain attempt to escape with their lives. The hoard consisted of countless gold and silver ornaments, along with a huge array of jewels.

Cortés and a handful of his men got away with their lives and returned a year later to exact their revenge. When the inhabitants of Tenochtitlán got wind of the approaching invaders, they buried the remains of the city's treasure in and around Lake Tezcuco to prevent it from falling prey to the gold-crazed Spanish.

Today, a vast treasure trove remains hidden beneath nearly five centuries of mud and sludge on the outskirts of Mexico City, the modern day incarnation of Tenochtitlán. Generations of treasure seekers have sought the lost hoard without success. A former president of Mexico even had the lake bed dredged, but no treasure was found.