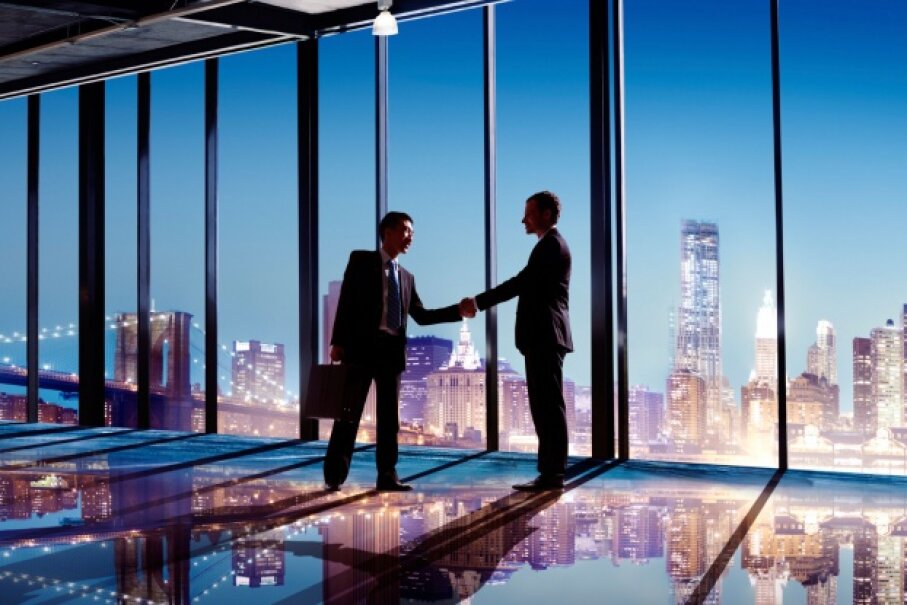 People shake hands all the time. It’s one of the many etiquette-based behaviors that keeps life running smoothly. © Rawpixel Ltd/iStockphoto

If you could put on a set of headphones that gave you a superpower, what superpower would you choose? For a lot of us, it's probably safe to say invisibility. Laugh if you must, but we didn't choose it randomly. Just watch how people act when they're plugged into their music. That sound they're pumping into their ears may make them feel transported away or isolated from all the people and things happening around them. But tunes and a good pair of headphones won't make anyone invisible.

Part of the appeal of invisibility is the state of being unobserved — free from worry about social rules. But tuning out the world isn't an excuse to forgo common courtesy. Invading personal space, bumping into people, or ignoring outsiders because you can't hear them over your music aren't anyone's idea of good manners.

We have basic rules of etiquette to help guide us comfortably, rather than embarrassingly, through social situations. You'll notice a common thread running through even the most basic rules of etiquette: Acknowledging and being considerate of other people is always good form. So even if you're lost in the musical wonderland of your favorite melodies, remember that you still need to be courteous to others.

Mobile Etiquette: Put Down Your Phone 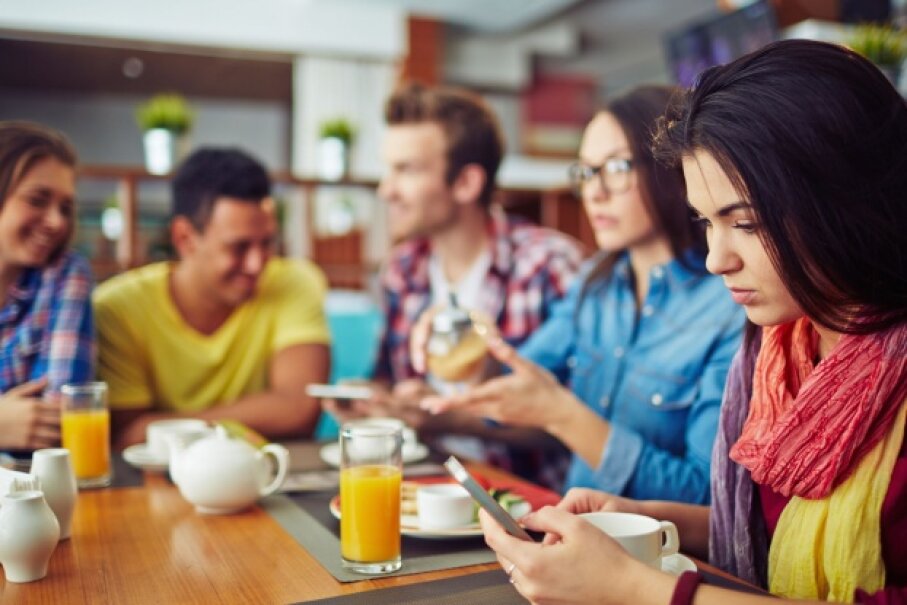 Emergencies come up, but the vast majority of the time, people are just using their mobile phones for non-urgent tasks. It’s OK to not look at it for a while. Enjoy the people around you! © shironosov/iStockphoto

You turn your cart down the bleach and detergents aisle and there she is. You heard her three aisles away, having what you'd consider a private phone call on speakerphone while browsing the fabric softener. Is this better or worse, you wonder, than the guy in the cereal aisle who was listening to music — without headphones?

More than 80 percent of Americans admit they get irritated with people who break the implied social graces of cellphone usage in public places. In fact, it bothers us so much that we notice people's bad mobile manners an average of five times a day. Social graces and cell phones? Yes, you're judging, whether you realize it or not. And what's funny about all of this is 77 percent of us admit we don't bother adhering to good mobile manners, ourselves [source: Post].

Good mobile etiquette includes not only being aware of your proximity to other people (don't forget to use your "inside" voice, if you're near someone else), but, and perhaps most important of all, having an overall consideration for others.

Know when to silence or stash your phone. Don't use your phone or any other mobile device (even just glances to check for new messages) when you're in a restaurant. You're holding up more than just your own dinner when you waste time texting instead of reading the menu. The same goes for when you're in an enclosed space with other people (such as on a train or in an elevator), or when you're supposed to be interacting with the people with you — you know, in person. 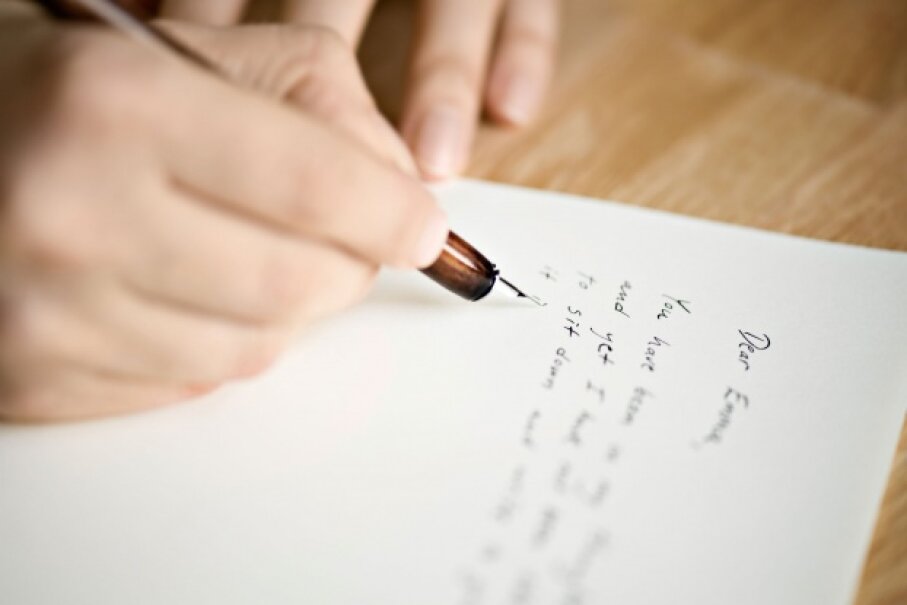 Take the time to write a note to someone in their time of grief. © Eerik/iStockphoto

Offering condolences feels awkward for many of us, and most of the time it's not because we're too overcome with grief. It's because we don't know what to say — or whether we should say anything at all. The point of expressing your sympathy is to share with those who are grieving that you're thinking of them and that you share in their loss.

Although you may or may not wish or be able to attend the visitation and funeral, depending on your relationship to the deceased (and your own level of comfort), extending condolences can be as easy as sending the grieving family or friend a card or letter. But this is a time when you should skip modern technological conveniences. Make it a handwritten note. By no means should you send your sympathies with an email, text message or tweet. It's OK to keep it short, just as long as you keep it sincere. If you're close with someone who has experienced a loss, reaching out via technology is fine, but you should still send hand-written condolences.

And for those who are grieving, reciprocity is in order. Proper etiquette recommends you thank each person who extended their support and kindness. All these niceties may seem overly formal in the modern world, but they soothe emotional pain and reinforce a sense of community. 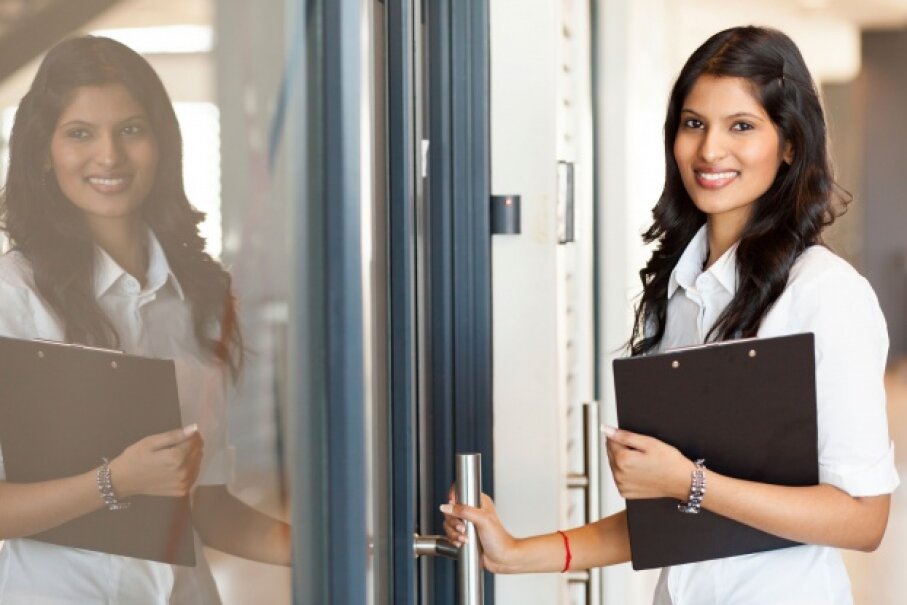 No matter who you are, it’s good manners to hold the door for the person behind you. © michaeljung/iStockphoto

Who opens the door for whom? Men for women? Or just for those who look like they need a hand? There are so many versions of the door-holding rule (including holding a door for no one but yourself), and some are hilariously outdated. As many as 41 percent of Americans surveyed would prefer to maintain the tradition of men opening doors for women [source: CBS News]. But in a world of good manners, shouldn't the rule on holding doors just be that the first person to arrive at a door holds it open for the person following, not because of society's expectations, but simply because of good manners?

There may be a scientific, not cultural, reason behind our door-holding etiquette. Scientists report we unconsciously hold open a door for the person behind us if that person is close, and, correspondingly, when we see a door held for us we unconsciously quicken our pace. It turns out that by doing so, we're saving the time and effort collectively for all of us [source: Santamaria and Rosenbaum]. Plus, if everyone went along with it, it should come out pretty evenly on how many times every single person held a door — which is only fair.

If you're the one on the receiving end, it's polite to thank the person holding the door for you. And don't forget to pay it forward. 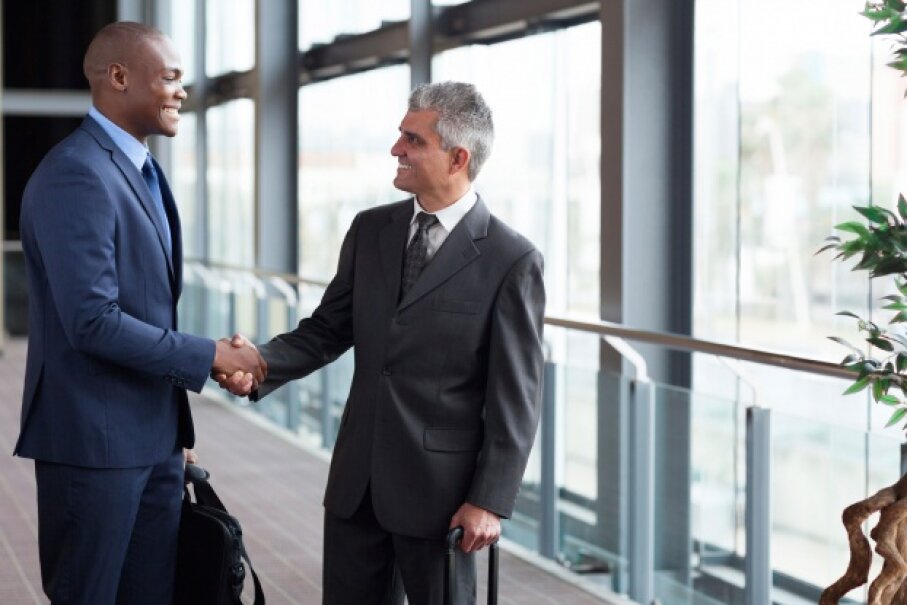 Introducing yourself, whether socially or in a business context, is best when you make eye contact with the person you’re meeting. © michaeljung/iStockphoto

The tradition of the handshake is centuries old and began as a way to show you were friendly and literally did not have any weapons hiding up your sleeve. What they didn't know then, and what we know now, is that two people shaking hands are basically doing the same thing as two dogs sniffing each other in greeting: We're assessing the other person and in turn giving them the opportunity to do the same. And there's a correct way to do it.

Introducing yourself to another person begins with a handshake. Extend your hand — your whole hand, not just your fingers — as you say hello. Shake from the elbow, not the wrist or shoulder, and shake only for three to four seconds (that's two to three pumps, if you pump), which should be about as long as your greeting.

The best introductions are conversational yet brief, and they use simple public speaking tricks. For instance, using your name more than once as you introduce yourself will help the other person remember you (though it may feel conversationally clunky). Similarly, saying a new acquaintance's name (twice, if possible) in the first 12 words of conversation will increase your odds of remembering that name, and it also makes you appear interested (perhaps more than you really are). And don't forget to make eye contact and smile. You'll put everyone more at ease. 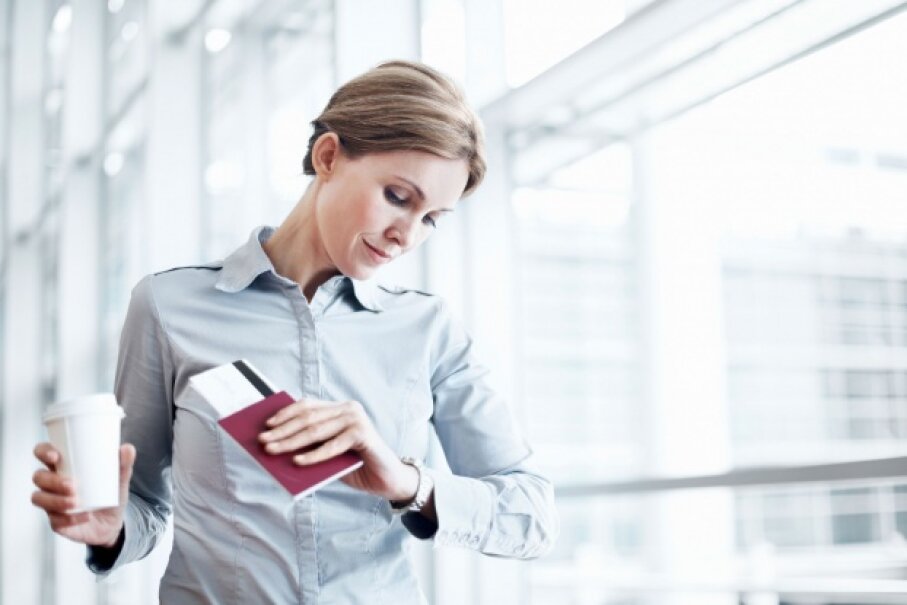 Leaving someone waiting is not cool. There’s no way around it. And it has ripple effects that could impact more people than you may realize. © kupicoo/iStockphoto

Oscar Wilde once wrote that "punctuality is the thief of time." While you may have to sacrifice something in your life to make your appointments on time, being 10 minutes late for everything steals time from everyone else.

Consider the doctor's office for a moment. The first patient of the day is late, and although your appointment isn't until hours later, it's still your problem. That one person's delay can create a sweeping domino effect on all successive patients' schedules. That's the trouble with tardiness: It's intrusive, and it's rude.

Being late not only wastes everyone's time, it implies your time is more important than that of those waiting for you — whether that's the truth or not. The offending lateness could also be perceived as a calculated way of getting the upper hand or control of a situation.

Being late, for some people, though, is far from deliberate, although it's still aggravating to those who equate punctuality with good character. People who are chronically tardy often share other personality traits, including tendencies to be anxious or easily distracted. And sleep psychologists have discovered that people who are night owls tend to be less punctual than those who are early birds [source: Werner]. In fact, many of us are late because we suffer from something called the planning fallacy. That just means we're all ridiculously bad at judging how long it will take us to complete our daily to-do list. Just how bad? On average, we underestimate the duration of and effort needed for a task by 40 percent [source: MacDonald]. So try to be honest with your time, and make an effort to be punctual — it keeps the world running on time. 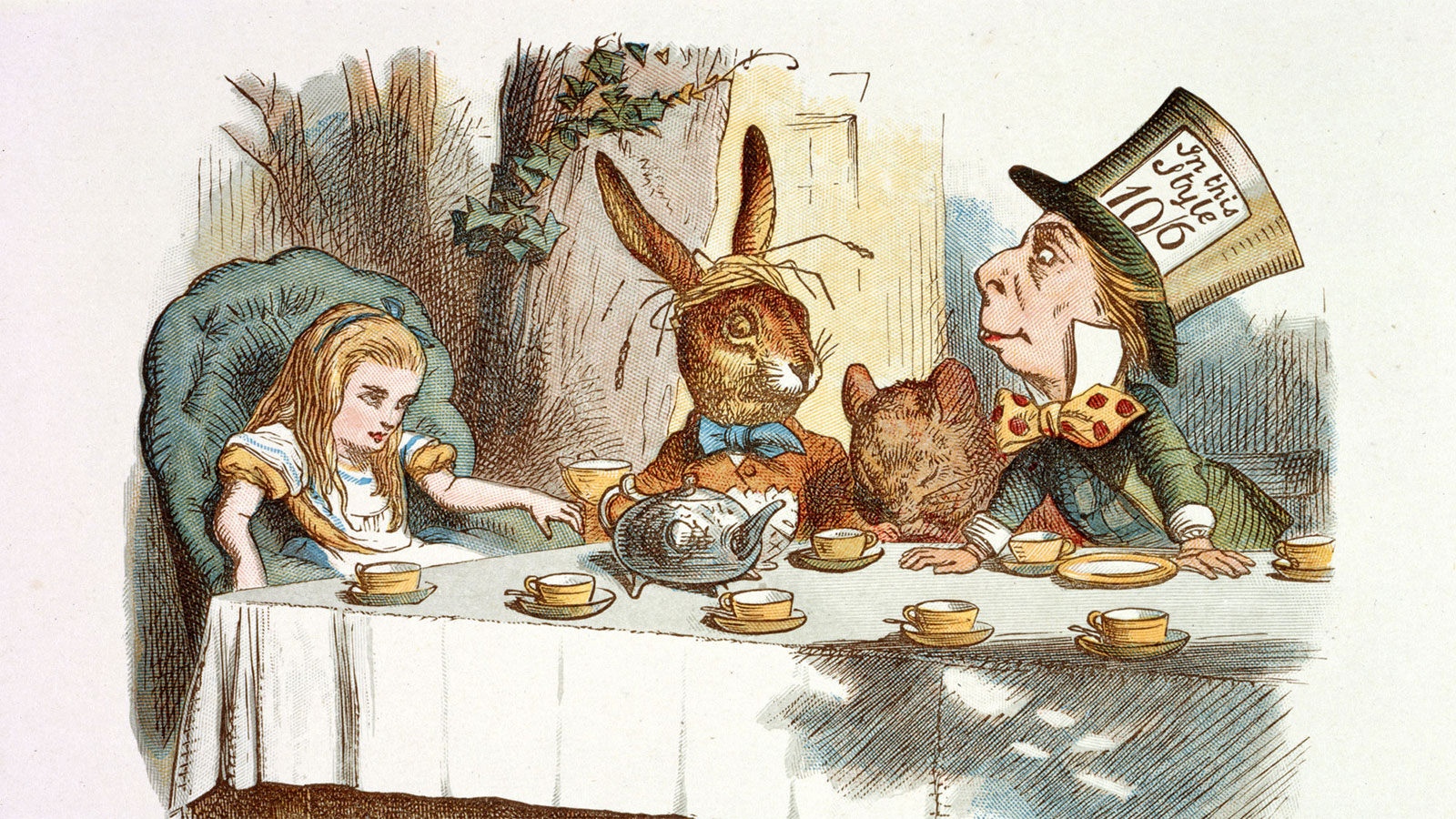 The expression 'mad as a hatter' predates the Mad Hatter in 'Alice in Wonderland.' So, where did the term come from?

Emily Post is said to have described good manners as nothing more than being aware and sensitive to other people. That's succinct and easy, but really, reading all these studies about social graces suggests good etiquette is more about knowing which fork to use, while good manners is being aware of and showing respect for others. Having both good manners and etiquette makes you extremely polite. Now that's settled.