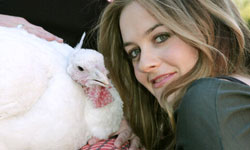 What do Alicia Silverstone and this bird have in common?
Michael Tran Archives/Getty Images

Alicia Silverstone set hearts a-thumping in 1995 as the blonde high school bombshell in "Clueless." In 2012, however, a viral video of Silverstone passing pre-chewed food into her son's mouth set stomachs a-churning. The vegan actress hadn't gone off the deep end; she was simply pre-masticating a hearty goulash of miso soup, collards, radish and daikon for 10-month-old Bear Blu in the same way a mother bird feeds its chicks.

Also known as kiss-feeding, pre-mastication is a rare -- but by no means new -- parenting technique that delivers iron and other nutrients from food that molar-less babies younger than 18 to 24 months wouldn't normally be able to process [source: Hanes]. The mouth-to-mouth delivery system also exposes babies to bacteria in their mothers' saliva, which some believe could boost the children's immune systems [source: Wolchover]. In developing nations that don't have access to baby foods or food processors, pre-mastication is still fairly common, in fact [source: Wolchover]. Some scientists warn that kiss-feeding can also pass along harmful pathogens and disease, such as HIV, but in the case of the negative response to Silverstone's mama bird mimicry, it was the extra close mother-baby contact that ruffled so many feathers.