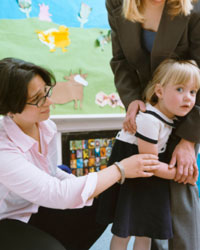 Overparenting often comes from a sincere desire to provide the best for children. Yet that urge can fester into intra-parental competition, as well anger and hostility at the merest hint of a child being harmed in any way. In 2012, organizers of an annual Colorado Easter egg hunt cancelled the event because so many parents jumped the starting gun and wrestled for the coveted plastic eggs [source: Associated Press]. More aggressive overparenting outbursts are no longer confined to mom-said, dad-said anecdotes passed along in PTA meetings, either. Facebook status updates and comments publicly reveal the rantings of mothers and fathers incensed at teachers, coaches and other kids, sometimes even threatening bodily harm to those who toss a rock into the spokes of their sons' and daughters' metaphorical bicycles [source: STFU Parents]. When parents find themselves literally fighting on behalf children -- with principals, nannies, coaches, friends -- they may have crossed the line from helicopter to (not so) stealth bomber.

Experts say parents should also allow their kids to resolve peer conflicts and not immediately intervene to diffuse situations. Child psychologists often advocate allowing boys and girls to learn how to work out differences with siblings and friends on their own, instead of constantly relying on parental mediators [source: Ozment]. That way, adolescents can learn how to problem-solve on their own. On athletic fields and in classrooms, parents should choose their battles wisely as well. Not making the grade or scoring the winning point are valuable lessons for kids as well, whereas witnessing a parent screaming at a teacher or coach only undermines that adult's authority. While it's understandable that parents don't relish seeing their children in disagreements or disappointed, it also isn't their job to serve as defense attorneys on kids' behalf.