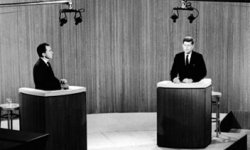 Richard Nixon proved that he didn't have a face for television.
Pictorial Parade/Getty Images

From our vantage point more than 40 years later, it's hard to imagine that John F. Kennedy was considered the clear underdog in his 1960 race against Richard Nixon. But Kennedy was a relatively unknown and unproven senator, and Nixon was a veteran congressman and vice president of these United States of America under Dwight D. Eisenhower. But Kennedy's fortunes changed considerably after the two men made political history by participating in the very first live televised presidential debate.

The hard truth about television is that it's a medium that favors physical attractiveness, poise under pressure and the type of body language that radiates self-confidence. Nixon, already at a disadvantage to Kennedy in the looks department, arrived in New York for the debate suffering from the flu and 20 pounds (9 kilograms) underweight after a recent stint in the hospital [source: Cunningham]. Kennedy, on the other hand, had just returned from campaigning in California and looked tanner and more virile than ever.

Even in the grainy, black-and-white footage from that first debate, you can clearly see poor Nixon's flop sweat. One moment of the debate is particularly crushing for Nixon. Kennedy, unaided by notes, casually delivers a cordial but cutting comparison of the choice before the American people: not between two men, but between two parties with strongly opposing values. Kennedy ends by saying, "I think Mr. Nixon is an effective leader of his party. I hope he would grant me the same. The question before us is: Which point of view and which party do we want to lead the United States?"

Right at that moment, the camera cuts from a close-up of the tanned New England playboy to a pale, ashen Nixon wincing in his chair. "Mr. Nixon, would you like to comment on that statement?" asks the moderator. "I have no comment," says Nixon, sweaty and defeated.