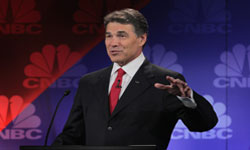 Rick Perry was supposed to save the Republican Party in 2012. When he entered the presidential race in August 2011, the Texas governor was the only candidate to nail the conservative trifecta: Legitimate Tea Party membership; vocal and devout Christian faith; and a small-government, anti-Washington platform [source:Parker]. When Perry finally threw his ten-gallon hat into the ring after months of playing it coy, he leapt to the top of the polls, at one time commanding 40 percent of polled Republican voters [source: Rachman].

Perry had the conservative credentials, the Texas drawl and the outstanding hair of strong Republican candidate, but he showed his Achilles' heel early: debating. In the very first Republican primary debate, Perry's rivals ganged up on the popular new guy and Perry seemed ill-prepared for the challenge, stumbling frequently over his words. In the ensuing weeks, Perry and his team worked hard to remove the "bad debater" brand from his longhorn hide. But then came the debate on November 9, 2011, and its infamous "oops" moment.

Perry was a minute into a longwinded comment on somebody else's longwinded comment about political divisiveness, when he abruptly turned to Ron Paul and held up three fingers. "It's three agencies of government that when I get there are gone," Perry promised in his Yoda-esque delivery. "Commerce, education, and... [painful pause] what's the third one there?" Even after his helpful new "friends" on the stage offered suggestions — maybe the EPA, Ricky? — Perry just looked down at his empty podium and muttered, "I can't... the third, sorry. Oops!"

Perry's "oops" clip went instantly viral, causing some viewers and political commentators to not only question Perry intellectual fitness for the office of the president, but whether or not he was on drugs [source: Fikac]. So much for frontrunner status. Perry suspended his campaign after receiving 0.7 percent of the primary vote in New Hampshire [source: Blake]. For the record, the third agency he promised to kill was the Department of Energy.