Browse the article The 25th Amendment: The Other Constitutional Way to Remove a President 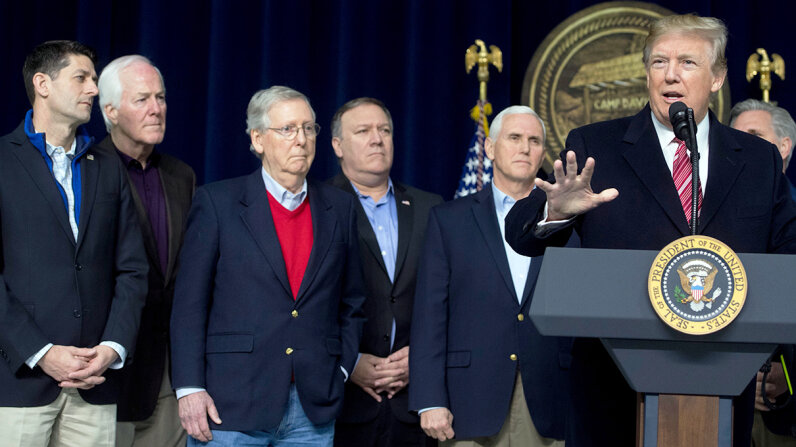 President Donald Trump speaks during a retreat with Republican lawmakers and members of his Cabinet at Camp David in Maryland on Jan. 6, 2018. SAUL LOEB/AFP/Getty Images

Some constitutional facts you learned in high school U.S. history probably left a lasting impression. For example, the 13th Amendment abolished slavery, and the 19th Amendment afforded women the right to vote. But even the most dedicated scholars can have trouble keeping track of all 27 amendments to the Constitution. And you may not have ever had a reason to ruminate on the 25th.

The 25th Amendment has received special attention as news stories regarding President Donald Trump's fitness for office have emerged. Reporters and commentators have wondered aloud whether Trump will successfully carry out four years in office given his online actions, the release of the Mueller Report and news that two judges have now refused to block House subpoenas for the president's bank records.

House Speaker Nancy Pelosi, who so far has been pushing against starting impeachment hearings, on Thursday May 23, 2019, said that Donald Trump needs "an intervention" after his latest "temper tantrum" at the White House, referring to the president's behavior during a meeting on infrastructure the day before.

What Is the 25th Amendment?

Proposed by Congress and ratified by the states following, the 25th Amendment provides the procedures for replacing the president or vice president in case of death, removal, resignation or incapacitation. The 25th Amendment was created during the Cold War following President Dwight D. Eisenhower's three serious illnesses and President John F. Kennedy's 1963 assassination.

Eisenhower originally entered into a letter agreement that stated if his health impeded his ability to run the country, power would be transferred to his vice president, Richard Nixon. This led to the official amendment that clarified the rules around transfer of power in the event of an incapacitated president. After numerous congressional hearings, the final version passed the House and Senate in 1965, and was ratified on Feb. 10, 1967.

There are four sections to the 25th Amendment:

Section 4 addresses the problem of a president who is unable or unwilling to acknowledge his or her inability 'to discharge the powers and duties' of the presidency. It would be used most likely if a president falls unexpectedly unconscious, though it also clearly applies when a president is "incapacitated" because of some other mental or physical inability.

History buffs may recall the invocation of the 25th Amendment as a result of the Watergate scandal in the 1970s. President Nixon invoked it to replace resigning vice president Spiro Agnew with Gerald Ford; then when Ford replaced Nixon as president, Ford invoked it to appoint Nelson Rockefeller to succeed him as vice president.

However, in order for Section 4 to be implemented, the vice president and a majority of "the principal officers of the executive departments" must declare the president incapacitated in a written statement to the Speaker of the House of Representatives and the president pro tempore of the Senate. Once that happens, presidential powers are automatically transferred to the vice president.

In order for Congress to successfully declare a president "disabled," two-thirds in each chamber must conclude that he "is unable" to handle the office.

Could the 25th Amendment Be Applied Today?

The disability clause of the 25th Amendment has been invoked multiple times since ratification. Presidents Bill Clinton, George W. Bush and Ronald Reagan invoked it during medical procedures, though it was never used when Reagan was shot in 1981.

However, Section 4 has never been invoked to remove a president from office. John Hudak, deputy director for Center for Effective Public Management and senior fellow for governance studies at the Brookings Institute writes that the process "is more difficult than impeachment and is reserved only for truly unique and dire circumstances."

Because the vast majority of Trump's Cabinet would need to support the president's removal, many speculate the invocation of the amendment during a Trump presidency isn't realistic. "The amendment is purposefully set up to require a high burden of proof, and there is no evidence that Vice President Mike Pence or the majority of Trump's Cabinet have turned on him," Politico's Annie Karni writes.

However, the taunting nature of just some of Trump's tweets, including calling former Secretary of State Rex Tillerson "dumb as a rock," as well as one threatening to destroy Iran, set off alarm bells once again. The bottom line, however, according to legal experts, is that for now, it's all simply speculation.

"The 25th Amendment would require, for mental incapacity, a major psychotic break," former Harvard Law School professor Alan Dershowitz told Politico. "This is hope over reality. If we don't like someone's politics we rail against him, we campaign against him, we don't use the psychiatric system against him. That's just dangerous."

Now That's Interesting
Four vice presidents have inherited office due to the president dying of natural causes: John Tyler, for William Henry Harrison in 1841; Millard Fillmore, for Zachary Taylor in 1850; Calvin Coolidge, for Warren Harding in 1923; and Harry Truman, for Franklin Roosevelt in 1945. Four vice presidents took office after the president was assassinated: Andrew Johnson, for Abraham Lincoln in 1865; Chester Arthur, for James Garfield in 1881; Theodore Roosevelt, for William McKinley in 1901; and Lyndon Johnson, for John F. Kennedy in 1963.