by Stephanie Watson & the Editors of Publications International, Ltd.
Prev NEXT
13

From a Maryland cemetery: "Here lies an atheist. All dressed up and no place to go." 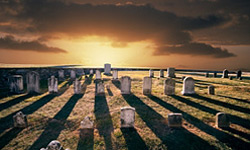 The cemetery at the Antietam National Battlefield in Maryland.
Ed Freeman/Getty Images

This epitaph comes from a cemetery in Thurmont, Md., and it's made many lists of top humorous tombstone quotes (along with, "I told you I was sick," from a Florida cemetery). When author C.S. Lewis was told about the inscription, he reportedly replied, "I bet he wishes that were so" [source: Lewis]. It's unclear who the atheist in question was (the headstone bears no name) or whether his assumption about the afterlife (or lack thereof) was accurate.