by Stephanie Watson & the Editors of Publications International, Ltd.
Prev NEXT
5 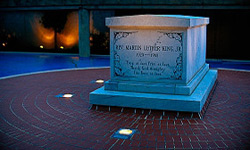 When civil rights leader Dr. Martin Luther King, Jr. delivered these immortal words on the steps of the Lincoln Memorial on August 28, 1963, he created a landmark moment in the fight for civil rights. Sadly, Dr. King would never live to see the full realization of his "I Have a Dream" speech. On April 4, 1968, he was assassinated while standing on the balcony of the Lorraine Motel in Memphis, Tenn. Eighty thousand mourners attended his funeral, which was held at Ebenezer Baptist Church, the Atlanta church where he'd once preached. Today, King is buried at the nearby Martin Luther King Jr. Center for Nonviolent Social Change, his gravestone inscribed with those famous words, which he'd borrowed from a spiritual of the same name.