by Stephanie Watson & the Editors of Publications International, Ltd.
Prev NEXT
7 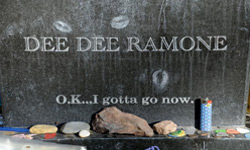 Dee Dee Ramone is best known for helping to launch one of the most influential punk bands in history--the Ramones. After leaving the band in 1989, he went on to have a successful solo career, and even wrote a few books. Just a few months before Ramone's 2002 death of a drug overdose at age 49, the band was inducted into the Rock 'n' Roll Hall of Fame. In his acceptance speech, Ramone expressed his unique sense of humor by saying, "I'd like to congratulate myself and thank myself and give myself a pat on the back" [source: Devenish]. His epitaph, likely a reference to the Ramones hit, "Blitzkrieg Bop," proved he was witty to the end. Dee Dee was buried near guitarist Johnny Ramone at the Hollywood Forever Cemetery in Los Angeles (their headstones list their real names, Douglas Colvin and John Cummings).