by Stephanie Watson & the Editors of Publications International, Ltd.
Prev NEXT
11 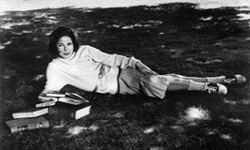 Actress Joan Hackett on the set of the 1966 film "The Group."
United Artists/Getty Images

Eccentric actress Joan Hackett started her career on Broadway, and then became a regular on TV throughout the 1960s and 1970s, appearing on popular shows like "The Twilight Zone" and "Bonanza." Hackett became known almost as much for stubbornness as for her acting. She drove directors nuts with her demands, which included a full 10 to 12 hours of sleep for her to perform at her best. While she was resting she didn't want to be disturbed, so she used to hang a note on her door that read, "Go away -- I'm asleep." In 1983, when she died of ovarian cancer at age 49, the same words graced her gravestone, providing Hackett some much-needed peace and quiet during her eternal slumber.