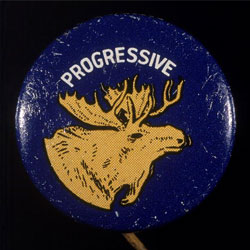 Percent of the Popular Vote: 29

When Rough Rider Teddy Roosevelt first galloped into the White House as William McKinley's vice president in 1900, he did so as a Republican. But when he ran for office for the third time in 1912, the splintered Republicans sided with Roosevelt's 1908 presidential successor, William Howard Taft. Incensed, Roosevelt and his band of allies quickly formed a third party, the National Progressives, better known as the Bull Moose Party [source: Garber].

Up against progressive Democrat Woodrow Wilson, Roosevelt campaigned aggressively until a few weeks before the election, when he narrowly survived an assassination attempt. Roosevelt was shot in the chest outside a Milwaukee hotel by a local saloon owner, and the ex-president's metal eyeglass case in his breast pocket and 50-page speech he clutched against himself stopped the bullet from making fatal contact [source: Garber]. In true Rough Rider style, Roosevelt delivered his speech as planned that afternoon with the bullet still in his body [source: Glass]. That brand of bravado couldn't make up for the rift within the Republican Party that split votes between Roosevelt and Taft, thus surrendering the electoral advantage -- and the presidency -- to Woodrow Wilson.