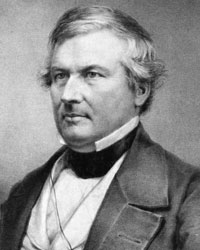 Just as race relations compelled anti-desegregation politicians Strom Thurmond (1948) and George Wallace (1968) to run for president on third-party tickets, the rights of black citizens was also the pivotal issue a century prior in the 1856 election. At the same time, the political landscape was undergoing a major transition. The formerly dominant Whig Party had begun dissolving, and a new, pro-abolition group called the Republican Party was on the rise to challenge the established Democratic Party, which preferred to leave slavery up to states to decide [source: Ernst and Sabato]. With that topsy-turvy political backdrop, the middle-ground American Party nominated former President Millard Fillmore, who graduated from vice president to the executive seat after Zachary Taylor died in office in 1850, to campaign on its anti-immigration platform. Fillmore and his nicknamed "Know Nothings" -- a moniker that referred to the secret way in which the party was organized -- didn't hold much appeal to slave-holding Southerners but diverted enough electoral votes away from the Republicans to deliver the presidency to Democrat James Buchanan [source: Heidler, Heidler and Coles]. Maryland was the only state that sided with Fillmore and the Know Nothings.