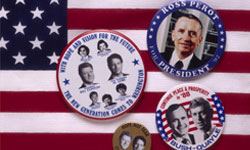 In 1992, Ross Perot made an impressive showing at the polls for a third party candidate.
Fotosearch/Getty Images

Independent presidential candidate and billionaire Ross Perot suspended his 1992 campaign for three months from July to October, restarting it barely one month before Americans headed to the polls to pick among him, George H.W. Bush and Bill Clinton [source: Holmes]. The popular voting results indicated that the break from stump speeches and baby-kissing wasn't all that detrimental either.

Having bankrolled his own bid for the White House, the wealthy Texan courted voters with promises of a balanced federal budget and a halt to deficit spending. In return, Perot wooed 18.6 percent of the vote. Stunned pundits noted that the conservative-leaning Perot had become one of the most successful third party candidates to date, but his second presidential audition in 1996 on the Reform Party ticket wasn't so rosy. Up against Bill Clinton once again, Perot ended up with only 8 percent of the votes [source: Woolley and Peters].