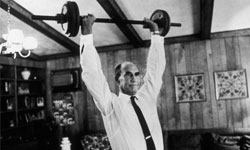 Strom Thurmond couldn't muscle a win for the Dixiecrats in 1948.
George Thames/Getty Images

Though he left behind one of the most reviled political legacies in U.S. history, former South Carolina governor Strom Thurmond managed to win 2.4 percent of the popular vote when he ran for president in 1948. Running on a pro-segregation platform, Thurmond was the leader of the third-party States' Rights Democratic Party, better known as the Dixiecrats, which splintered from the Democratic Party when the latter endorsed racial desegregation of the military at its 1948 national convention [source: New Encyclopedia of Georgia]. Appealing to states in the Deep South, Thurmond and the Dixiecrats won Alabama, Mississippi, South Carolina and Louisiana [source: Woolley and Peters]. But the segregationist stance didn't attract broader support in the pre-Civil Rights political climate, and the party dissolved after the election. As Democratic opponent Harry S. Truman then entered his second presidential term, Thurmond, meanwhile, went on to have a 47-year career as a U.S. senator for South Carolina, and turned 100 years old while still in office in 2002 [source: Biographical Directory of the United States Congress].