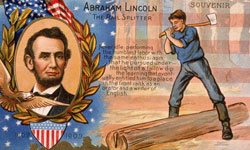 Believe it or not, when Abraham Lincoln ran for president in 1860, the Republican Party hadn't emerged yet as a major force in American politics [source: PBS]. It had only been around for six years and was started by anti-slavery groups. In 1856, Republican Party candidate John C. Fremont came in second out of three, beating out the previously powerful Whig Party. Four years later, Abraham Lincoln competed for the presidency against three others, which meant the somewhat slim 39.8 percent of the vote he earned, largely concentrated among Northern constituents, was enough to push him and the Republicans over the victory line.

Although Lincoln didn't found the Republican Party as some people mistakenly claim, the "Great Emancipator" was responsible for cementing its stance as a major political party in the United States. Therefore, not only did a third-party candidate win the presidency, but it also catapulted American politics toward its long-standing two-party system.