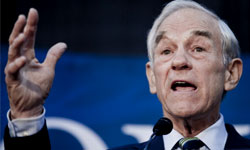 In 2008 and again in 2012, Texas Congressman Ron Paul made back-to-back runs for president.
T.J. Kirkpatrick/Getty Images

In the 2008 presidential election, Republican Congressman Ron Paul only won 0.03 percent of the popular vote, plopping him in ninth place [source: Federal Election Commission]. Despite the slim returns, the Texas legislator has been credited with sparking the Tea Party, a widely publicized conservative third party that emerged in 2009 [source: Reeve]. Paul's vocal stance on minimizing the role of government to the point of dissolving the Federal Reserve and returning to the gold standard, as well as withdrawing military forces in foreign outposts, also re-energized the Libertarian Party, the oldest third party in the U.S. [source: Sanneh].

Hoping to score the Republican nomination for president in 2012, Paul hit the campaign trail again and spread his shrink-the-government message to larger crowds. But in May 2012, with former Massachusetts governor Mitt Romney in an insurmountable delegate lead, Paul threw in the towel, having won no primaries or caucuses.