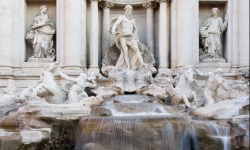 As the superstition goes, throw a coin in the Trevi Fountain, and you’ll travel to Rome again one day.
Rob van Esch/Moment/Getty Images

Rather than bring luck to your journey or ensure you make it home safely, some travel superstitions are designed to let you know that future travels are coming. Itchy feet are a sign that you will take a trip — this superstition being so well-known that the phrase "itchy feet" brings to mind a sense of wanderlust these days. Some more dated customs state that finding a ravel on your dress or spotting a spider running down its web are hints that travel is in your future. Wondering where you'll go? Another superstition suggests that listening to the cry of a dove will offer clues. According to legend, the direction of the call of the first spring dove tells you which direction you will travel [source: Carroll].

Eager to hit the road? Grab the nearest empty suitcase, bag or carry-on and run around the block with it on New Year's Day [source: Capo]. If superstition holds, you'll soon find yourself on a journey. Before you leave, celebrate an old Russian custom to bring a bit of luck to your trip: Pack your bags, and take a seat on your suitcase. Have friends and family gather round for a moment of quiet reflection and goodbyes [source: Lundmark]. Finally, no matter what you do, never put wet clothes in your suitcase, as it's considered bad luck [source: Thomas and Thomas]. Hang that swimsuit up to dry, or carry it separately just in case.

Traveling by boat comes with a whole host of superstitions all its own. While it's common knowledge that riding aboard an unnamed boat brings terrible luck, the name of the boat itself matters too. It's bad luck to board a boat whose name ends in the letter "A," which is likely due to the demise of both the Brittania and the Lusitania during World War II. It's also a bad idea to travel on a ship that has had a name change. Just ask Ernest Shackleton, who changed the name of his vessel from Aurora to Endurance right before setting off on what would become a disastrous expedition to Antarctica in 1914 [source: Hanauer].

Of course, the whole point of travel is to enjoy your destination, and some spots come with their own long-standing superstitions. When you're in Rome, throwing a coin into the Trevi Fountain ensures you will one day return to the city. Visitors to Ireland can win the gift of gab by planting a kiss on the Blarney Stone in County Cork's Castle Blarney. Even destinations in the United States have their legends: If you find yourself in Springfield, Illinois, head to the birthplace of former president Lincoln. Rub the nose on the bronze bust above his tomb, and you're guaranteed to have a lucky day [source: Travel Maestro].

Beyond unlucky 13, certain numbers are unlucky solely because of their relationship to travel disasters. Many airlines refuse to incorporate the numbers 666 or 911 into flight numbers due to the negative connotations associated with these numbers. In addition, many airlines retire the numbers of crashed flights to ease fears of superstitious passengers — and also as a sign of respect for those lost. After flight 261 crashed in 2000, Alaska Airlines retired this particular flight number. U.S. Airways retired 1549, the number used to identify Captain Chesley Sullenberger's miracle landing on the Hudson, while most airlines avoid 191 after both Delta and American lost flights with this number. Finally, all flight numbers lost on September 11th have been retired by most major airlines [source: McCartney].

With the vast majority of high rises and hotels skipping right over the unlucky 13th floor, it can catch you off guard to find a hotel that doesn't follow this long-running superstition. Several of the big casino resorts in Las Vegas, including the Las Vegas Hilton, have bypassed the tradition of skipping right from 12 to 14, electing to include a 13th floor in spite of superstitions about this unlucky number. What I found interesting was reading what firefighters think when hotels include a 13th floor. Turns out, that 13th floor might actually be pretty unlucky if a fire breaks out; firefighters are so used to hotels without a 13th story that finding one that breaks with tradition could actually be confusing during an emergency. Intriguing how a seemingly baseless superstition might actually come to life in this kind of situation.