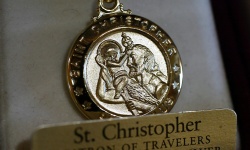 Take this medal with you on your travels, and you might have good luck.
Mel Melcon/Los Angeles Times via Getty Images

Travel is designed to take you out of your comfort zone and introduce you to new places, people and experiences. While this trip outside your daily life is a coveted part of any vacation, it can also be unnerving or downright anxiety-inducing. To help ease the strain of travel, many voyagers have turned to superstitions designed to help them arrive safely at their destination and ensure the trip goes smoothly. From lucky charms, to when you should leave, to choosing the right flight number, these superstitions run the gamut, leaving nothing to chance. Before you plan your next vacation, check out these 10 travel tales to discover some that might help ease your travel fears.

Any lucky charm can bring good fortune when you're on the road, but a St. Christopher medal is traditionally associated with lucky travels [source: Webster]. Once viewed as a martyr who carried the Christ child across the river on his back, St. Christopher was known as the Patron Saint of Travelers. Unfortunately, his status was downgraded in the early 70s, as many of the stories associated with Christopher were likely rooted more in legend than in fact. Despite his lack of status with the church, the St. Christopher medal remains one of the most popular charms for travelers and may be worn around the neck or simply carried in the pocket for luck.

When planning your journey, superstition dictates that you should choose your dates carefully. It's considered bad luck to start your journey on a Friday, which could be blamed on the fact that the crucifixion of Jesus took place on a Friday, according to Christian lore. The only thing worse than a regular Friday would be starting a journey on Friday the 13th; expect bad luck and a troubled trip if you start out on this day. Looking to get your trip started right? Set out on a Sunday, which is considered a lucky day to start a vacation, likely due to its link to Jesus's resurrection [source: Webster].

When you set out on your journey, you'll bring bad luck to your voyage if you look back toward home after starting out. It's also considered a really bad idea to head back home for any reason, including to pick up something you may have forgotten. Play it safe, and just replace the forgotten item when you reach your destination. Better yet, make a detailed packing list to avoid forgetting anything in the first place.

If you're saying goodbye to someone about to leave on a journey, get those goodbyes over with quickly; it's considered bad luck if both of you wave goodbye and then you proceed to stand there and continue to watch the departed traveler until he or she is out of site [source: Webster].

The number 13 finds its way into all kinds of travel superstitions, just as it plays a role in so many other superstitions in everyday life. It's allegedly bad luck to stay on the 13th floor of a hotel or building. This should be easy to avoid, as so many hotels simply skip the 13th floor, preferring to go right from level 12 to 14. When renting a car, take a minute for a bit of mental math, as it's bad luck if the numbers in the license plate add up to 13 [source: Webster]. At the airport, avoid gates or seats that include this fatal number. Once again, just like hotels, airports make this easy to do by largely skipping the number 13 when assigning gate or seat numbers. If you're heading overseas, keep in mind that other countries have their own version of the unlucky 13 legends. In Asia, the number four is connected to death and bad luck, while Italians fear the number 17 and its own connection to death in their culture [source: Rambow].

Travelers have all kinds of superstitions designed to get them safely through airports and ensure they survive the flight. This may range from kissing the ground when they land to stepping onto the plane with the same foot each time. Turns out, some airports have their own bizarre superstition for avoiding accidents. When construction crews finished the new control tower at the airport in Austin, Texas, in 1996, they added an evergreen tree to the very top of the tower. This custom of placing a tree on the top of a building originates in Scandinavia, where it's said that placing a cedar tree on top of a building brings luck [source: McCartney].