by Wesley Fenlon
Prev NEXT
4 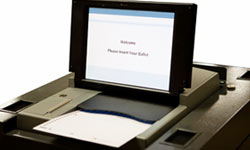 One of the criticisms regarding electronic voting machines like this optical scanner is that the software they run could be hacked.
©iStockphoto.com/Thinkstock

On the last page, we mentioned that Australia's electronic voting software was made open source to allow anyone and everyone to comb over it for security flaws. That's an interesting approach to security, and brings up an argument that often surrounds computer software. Is it safer if the source code isn't publicly available? Or should we assume hackers will break through anyway and put the code out for public scrutiny? Security experts disagree on the issue.

In 2004, e-voting vendors in the U.S. agreed to submit their software to the National Software Reference Library for tracking purposes. Doing so prevented the secret installation of patches, or software updates, to voting machines without security testing -- the code could be compared against the NSRL's copy to determine if it had been changed [source: PC World].

Though the software used in voting machines differs around the world, security is always an issue. India used about 1.4 million electronic voting machines in recent elections, but a study from the University of Michigan revealed a way to tamper with those results by intercepting votes [source: BBC].

Voting system software is simply a computer program that interprets an input, like a touch screen, into a vote, then stores that information in memory for votes to be counted. Like any other computer software, it's potentially vulnerable to exploitation. On the bright side, modern software has opened up new doors for voters with disabilities. Let's take a look at technology designed to aid disabled voters.