by Wesley Fenlon
Prev NEXT
7 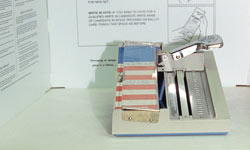 To use this card and lever voting mechanism, the voter must insert the ballot card, align the lever punch with each choice, and then push the lever down to punch a corresponding hole in the card.
©Stockbyte/Thinkstock

Paper ballots have been around as long as organized voting, but lever-action voting machines dominated elections in the U.S. for most of the 20th century. By the 1930s, many Americans found themselves in curtained voting booths, pulling levers to cast their ballots. Each movement of a lever would turn a wheel within the machine, notching up votes for a particular candidate or issue. Much faster than counting paper ballots!

Some voting precincts in the U.S. still use optical scanning technology to read votes off ballots much like the Scantron tests taken (and dreaded) by students. Optical technology has been around since the 1950s and 1960s, and presents disadvantages and advantages compared to punch-card systems. A verifiable paper trail is great for vote auditing, but inaccurate marks could cause the same computer tabulation errors as poorly punched cards.

Next up: how various systems protect their votes.