by Wesley Fenlon
Prev NEXT
9 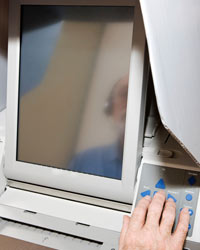 Electronic voting machines like this one are more common than ever.
© iStockphoto/Thinkstock

Electronic voting systems, such touch screen voting devices, don't actually produce physical ballots like punch cards. Votes are stored digitally on a memory cartridge, which is why they're called Direct Recording Electronic (DRE) systems. Advantages: There's no wasteful ballot printing, and language isn't an issue, since different languages can be programmed into software. DRE systems include non-touch inputs, like button-based voting devices, but aside from the input method, they all operate the same way.

DRE machines store votes in memory, which is physically taken to a central location to be tabulated for election results. The controversy around DRE machines comes into play with their modem connections, which can also be used to transfer votes via a larger network setup. While a point-to-point modem connection is much safer than transmitting data over the public Internet, security analysts have pointed out that phone lines are becoming more and more connected to the Internet [source: ProCon]. Hacking is still potentially an issue, but existing hacking techniques, like one performed by the University of Princeton on a Diebold machine, require physical access to the machine [source: Feldman et al].

It's hard to say if the machines are really any more susceptible to tampering than paper-based voting systems. Some organizations advocate paper trails for DRE voting systems to provide an audit trail. How do audit trails work? Let's tackle that next.