by Jessika Toothman
Prev NEXT
8 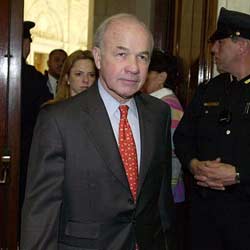 Kenneth Lay quickly grew into a figurehead for corporate corruption following the 2001 collapse of the Enron Corporation. He and other top executives of the Houston-based energy company spun a web of lies to employees and shareholders alike, for years touting strong returns and robust performance. The truth was far from it, however, and the company filed for bankruptcy protection in December 2001. In May of 2006, Lay's trial wound down, and the former chairman and CEO was declared guilty on counts of conspiracy, fraud and false statements. He died of a heart attack later that year.

But it isn't entirely fair to single out Lay -- after all, although the Enron scandal may have been one of the first of its kind to break, others have hit headlines in the years since. Corporate pirates abound in many industries these days. Take Bernie Madoff, for instance. His multibillion dollar Ponzi scheme shook the financial world and shattered the investment portfolios of thousands.