by Jessika Toothman
Prev NEXT
9 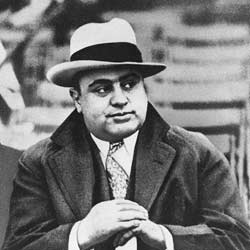 Al Capone was originally incarcerated for tax evasion in Atlanta, but after he gained too much control over prison officials there, he was transferred to Alcatraz.
AP Photo/File

Al Capone was a hardened mobster from an early age. His rackets included gambling, bootlegging, prostitution, bribery, drug trafficking, robbery and the occasional murder. Thought to have been the mastermind behind the St. Valentine's Day Massacre, a violent confrontation between gangs that left seven members of a rival mob dead, Capone was a singularly ruthless businessman in Chicago's criminal underbelly.

In 1930, Capone headed the newly declared list of Chicago's worst criminals, becoming Public Enemy No. 1 in a very real sense. But authorities had trouble making any charges against him stick for long. That is, until he was busted for tax evasion and convicted in 1931.

It's worth mentioning, however, that Capone also had a generous side. After the 1929 stock market crash, for example, he quickly opened up soup kitchens and donated clothes to the poor at his own expense. It's a good lesson in how slippery public enemies can sometimes have a softer side.