by Jessika Toothman
Prev NEXT
10 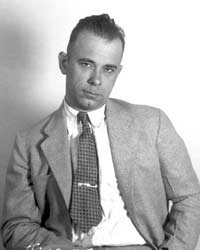 Big banks don't have a lot of friends among the general public due to the current economic recession. The same was also true during the Great Depression, so when the charming and charismatic John Dillinger came on the scene, robbing banks and sometimes destroying mortgage records. He quickly became something of a folk hero.

Dillinger robbed his first bank in June 1933, making off with more than $10,000 [source: PBS]. By September, he had relieved several more banks of funds, although this secured him a vacation to the Allen County Jail in Lima, Ohio. He didn't stay long, however. By smuggling in guns and giving them to fellow inmates, he aided their escape. A handful of them came back a couple of weeks later to return the favor.

Not even two full weeks after getting sprung from the big house, Dillinger and his newly formed gang managed a major score; they lifted $75,000 from the Central National Bank in Greencastle, Ind., on Oct. 23 [source: PBS]. The Chicago Police Department set up a special squad to nab Dillinger in December, so he took this as a cue to take a real vacation, and the gang road-tripped to Daytona Beach, Fla., to lay low for a little while.

Following a few more robberies, another escape from jail and plastic surgery, the law finally caught up with Dillinger. On July 22, 1934, he was ambushed and killed by special agents of the Division of Investigation, which a year later would be renamed the FBI.