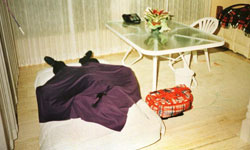 In the 1970s, Marshall Applewhite and Bonnie Nettles came to believe that they were the two witnesses referenced in chapter 11 of the Book of Revelation. They began preaching and gaining followers in California and Oregon with apocalyptic prophecies about how salvation would come (for those who were prepared) in the form of a spaceship. There, their bodies would be kept in a cocoon state to transform their bodies for heaven.

The group was known as "Human Individual Metamorphosis," and then later "Total Overcomers Anonymous," before becoming "Heaven's Gate" in the 1990s. Members had to live with the group as well as give up their possessions and family. To perfect themselves for salvation, Applewhite encouraged members to detach themselves from emotion and give up sex entirely. Members dressed androgynously with loose clothing and closely-shaved shaved hair.

Never consisting of more than about 60 people, the small group receded from public during much of its existence, finally coming out to proselytize once again in 1993. Over the next few years, using the emerging popularity of the Internet, they set up a Web site to help spread their message. In 1997, the Hale-Bopp comet was approaching close to earth, and a rumor suggested that a UFO was following it. The group took this rumor very seriously and became convinced that their salvation would finally come.

In March 1997, all 39 members were found dead from apparent suicide in preparation for their transition to heaven.