by Jane McGrath
Prev NEXT
7

Movement for the Restoration of the Ten Commandments of God 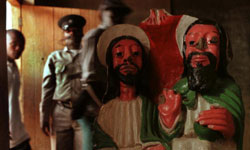 An icon remains inside one of the many rooms where cult members had lived in Uganda.
Tyler Hicks/Liason/Getty Images

The leaders also had doomsday prophesies. They predicted the apocalypse would occur on Dec. 31, 1999. In anticipation of this, members sold their possessions. However, when the end of the world didn't come that day, the leaders quickly altered their prediction and they claimed that the Virgin Mary would come on March 17, 2000, to save the faithful and bring them to heaven. Still believing the prophesies, members held a feast on March 16. They killed some cattle for the occasion and even ordered crates of Coca-Cola.

When March 17 arrived, police discovered that an explosion and fire had killed hundreds of the group's members. Although at first this was assumed to be a mass suicide, the evidence and subsequent uncovering of more bodies at other sites soon pointed to murder. Leaders had murdered the members, perhaps because they were unable to repay them for giving away their possessions after the prophesy failed to materialize. It was never determined whether the leaders killed themselves or fled the country.