by Molly Edmonds
Prev NEXT
2 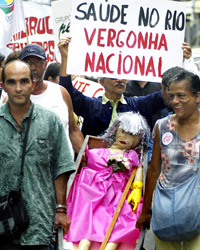 A protestor holds a sign reading "Public Health in Rio, National Shame" at a 2005 protest in Brazil.
Associated Press/Renzo Gostoli

In the early 1980s, the people of Brazil demanded change. Previous military regimes had left behind health care systems that served the haves while ignoring the have-nots. When the country established a new constitution in 1988, universal health care was one of its core tenets.

In Brazil, there is a public and a private option for health coverage. The public option is the government-funded Sistema Unico de Saude (Unified Health System, or SUS). SUS receives funding from multiple tax sources, including taxes on income, property and banking transactions. These multiple taxes have been unable to keep up with the rising cost of health care, though, which could bankrupt SUS in just a few years [source: Gomez]. Because SUS was an important part of the constitution, it likely won't be shuttered even if it verges on collapse. Already, the system is troubled: Corruption is widespread, and the country lacks basic infrastructure and personnel to provide health care to all.

As a result, more people are using private insurance. The private market is regulated separately from SUS. Though Brazil attempted to create universal health coverage in 1988, it still has a system that is divided by class [source: Alves, Timmins].