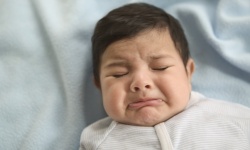 Please don't use any sort of home remedies if you suspect your baby's fontanelle, or soft spot, has truly fallen in.
Jose Luis Pelaez Inc/Blend Images/Thinkstock

If you've spent any time around a newborn, you're probably familiar with that slightly scary-looking soft spot at the top of its head, which endures until the child is around 2 years old. While this soft area, or fontanelle, is perfectly natural, some cultures worry that certain actions can cause it to drop, resulting in extreme injury or death.

In parts of Mexico, for example, mothers fear pulling the baby from the breast or bottle too soon, as this is thought to cause to caida de la morella, or fallen fontanelle. When this happens, some folk remedies to treat the condition include shaking the baby, reaching into the mouth and pressing up on the palate, or holding the baby upside-down and striking its feet [source: Bernstein and Bernstein].

All of these so-called cures can be dangerous and will do nothing to fix a supposedly fallen soft spot. A truly sunken fontanelle — when the spot noticeably dips down on its own instead of gently curving inward when touched — can be a medical emergency, often brought on by malnutrition or dehydration [source: NIH Fontanelles]. If you believe your baby has suffered an injury to the fontanelle, or something doesn't seem quite right, make haste to the nearest doctor's office and lay off the dubious folk cures.

One popular folk remedy in the United States involves using tobacco to cure a painful earache. While most versions of the treatment require you to simply take a puff of a cigarette and blow the smoke into the affected ear, some more extreme versions require you to stuff a wad of moist tobacco into the ear canal itself.

Of course, blowing tobacco smoke into the ear does nothing to heal or resolve an earache, though it's unlikely to harm the patient all that much, and some even argue that it promotes bonding between parent and child [source: UAMS]. Of course, this remedy comes with the same risks associated with all secondhand smoke exposure, so it's probably not the best solution for long-term health. Obviously, stuffing anything into the ear canal — including tobacco — is a huge no-no and likely to do much more harm than good.

Interestingly enough, some studies have shown that children exposed to second-hand smoke actually report more frequent earaches than those who avoid tobacco smoke, so it's possible that repeated attempts at this classic folk treatment could actually make earaches worse [source: Lee et al.]. For best results, keep tobacco smoke far from kids and stick to more traditional earache remedies found at the pharmacy or doctor's office.

In the world of cartoons, the best way to treat a black eye is to slap on a big slab of beef — preferably a raw steak. In some way, it kind of makes sense: The meat can draw out the fluid, reduce swelling and ease pain.

But while the standard black eye can easily be treated at home in most cases, you should never put steak — or any other meat — on the eye. Not only is it a waste of an expensive piece of beef, but there's absolutely no evidence that a steak will help reduce the pain, swelling or duration of a black eye. Even worse, the bacteria in the meat can actually lead to painful infections, transforming a simple black eye into a lingering condition [source: AAO]. Instead, stick to a basic ice pack, or grab a bag of frozen veggies in a pinch.

So where did this meaty myth originate? It's possible it dates back to the days before refrigeration, when meat was relatively plentiful and ice was tough to obtain. In those days, it may have made sense to preserve the precious ice supply and treat a black eye with a bit of beef [source: Israel].

When faced with a crying baby, many people will do absolutely anything to make the tears stop, especially when the baby is in pain. In many cultures, rubbing a bit of brandy or whiskey on aching gums is the best way to soothe a teething infant, at least according to folklore.

Despite its deep-seated roots, this advice actually runs contrary to expert opinions warning that parents should never rub alcohol on a child's gums. There's simply no safe amount of alcohol for little ones, and even minor exposure can cause serious health concerns in young children.

Instead, gently rub the gums with a cool, wet washcloth to soothe the pain and bond with your little one, or use cold — not frozen — teething rings to ease the baby's discomfort [sources: NIH Teething, Shu]. If your child is struggling with sleep-interrupting tooth and gum pain and these DIY remedies aren't quite cutting it, ask your doctor whether it's safe to use an over-the-counter pain reliever or a gel made specifically for teething babies.

I had my first child eight months ago and have been helping her through some painful teething for the past two months or so. While she is now the proud owner of five teeth, these pearly whites did not come easy. Throughout the process, I've been faced with frequent suggestions from well-meaning friends and family — including other young moms — that just a bit of brandy or whiskey would be just the thing to soothe her aching gums. I know that this simply isn't the right choice for my daughter, but I've been surprised to learn just how common the practice is, and how many people I know used it with success on their own babies. It's certainly made me curious just how many kids out there are treated with other potentially dangerous folk cures — from "curing" lice by dousing the head with gasoline to slathering butter on a burn.