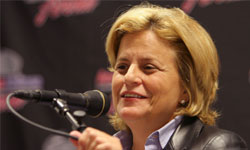 Born in Havana, Cuba, Ileana Ros-Lehtinen moved to Miami during her childhood and followed her American dream into teaching, which later inspired her to pursue politics in order to influence the public education system [source: U.S. House of Representatives]. In 1982, Ros-Lehtinen became the first Latina woman elected to the Florida state legislature, and she continued to climb the ranks and was elected to the state senate in 1986.

Three years later, the teacher-turned-politician won a Republican Party seat in the U.S. House of Representatives, representing yet another first for Latina woman [source: Library of Congress]. In Congress, Ros-Lehtinen was appointed to the Foreign Affairs Committee and eventually went on to chair the influential congressional group. Then, in 2011, Ros-Lehtinen achieved another first as the initial Republican representative to co-sponsor a bill to repeal the Defense of Marriage Act, which legally restricted marriage to unions between men and women, a stance that earned her praise from liberal groups more commonly associated with the Democratic Party [source: Terkel].

As of 2017, Ros-Lehtinen remains a member of Congress, representing the Florida district that includes Miami and its surrounding communities.