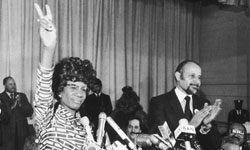 Shirley Chisholm was the first black woman elected to the U.S. Congress in 1968, but the outspoken educator from the New York City neighborhood of Bedford-Stuyvesant told the press that she didn't want to be remembered for that accolade [source: Barron]. Instead, "Fighting Shirley" preferred to go down in history for her unrelenting stance against the political machine of Washington.

Previously working for New York City's department of child welfare, Chisholm became involved with community organizing and won a seat in the state legislature in 1964. Four years later, under the campaign slogan "unbought and unbossed," Chisholm ran for U.S. Congress in a newly apportioned congressional district in Brooklyn. Her white Republican opponent James Farmer saw eye to eye with Chisholm on racial equality issues, but openly opposed the notion of a woman being sent to Washington, derisively referring to the former early childhood education consultant and daycare center director as a "little schoolteacher" [source: U.S. House of Representatives].

But once in Washington, that "little schoolteacher" didn't sit idly by. Instead, she publicly agitated against her initial assignment to the Agriculture Committee, which she viewed as a toothless position for someone from the cement jungle of New York, and then announced her candidacy for president in 1972. Chisholm didn't win the Democratic Party nomination, but continued serving in the U.S. House of Representatives for seven terms and became a founding member of the Congressional Black Caucus and the Congressional Women's Caucus in 1971 and 1977, respectively [source: U.S. House of Representatives]. She died in 2005.