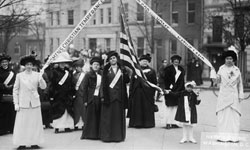 Susanna Madora Salter’s participation in her local chapter of the Women’s Christian Temperance Union landed her on the mayoral ballot as a joke.
Topical Press Agency/Getty Images

The first woman to win a mayoral race in the United States didn't even know that she was the on the local ballot until the day before the election [source: Kaufman]. In 1887, Kansas granted women the right to vote in municipal races, and as a joke, a group of men in the Quaker town of Argonia decided to nominate Susanna Madora Salter for mayor, representing the Prohibition Party [source: Kansas Historical Society]. The 27-year-old mother wasn't particularly political, but her involvement in the Women's Christian Temperance Union spurred the group of men to select her name as the target of the joke.

At the polls, Salter took advantage of the new women's voting right and cast her ballot in every local race except the one for mayor. However, the other Argonia women rallied behind Salter, despite her nomination being tongue-in-cheek, and she won without so much as a proper campaign. Salter served her term dutifully, but never sought political office after her stint as America's first female mayor [source: Kansas Historical Society]. She died in 1961, two weeks after her 101st birthday.