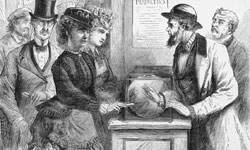 Victoria Woodhull attempted to run for president almost 50 years before American women were even allowed to vote.
Kean Collection/Getty Images

The first woman in the United States to declare her candidacy for president couldn't even legally vote, because Congress had yet to pass the 19th Amendment granting women's suffrage. Nevertheless, in 1871 -- 49 years before that amendment to the U.S. Constitution was ratified -- Victoria Woodhull announced her plans to run for office in the 1872 election. The daughter of a con man from Ohio, Woodhull started out as a spiritual medium, then made a name for herself professionally by starting Wall Street's first female-run brokerage and earned enough money to start a weekly magazine and travel around delivering speeches on women's rights [source: Brookhiser].

Although Woodhull's outspokenness and determination to challenge Victorian era prudery won her praise among some progressive circles, she was ultimately too brash to succeed politically. The clairvoyant-cum-candidate's writings about "free love" in her weekly magazine, "Woodhull & Claflin's Weekly," landed Woodhull in jail periodically, and she was put on trial and acquitted on charges of distributing pornography [source: NPR].

When the 1872 election rolled around, Woodhull was still embroiled in legal troubles, and her name didn't appear on any ballots. But the nicknamed "Prostitute Who Ran for President" could still claim victory for being the first woman to publicly try for a shot at becoming commander-in-chief. She died in 1927.