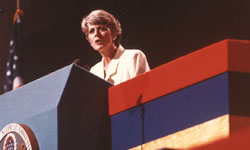 Although Geraldine Ferraro didn’t become vice president, her nomination by the Democratic Party in 1984 was an historical event.
PhotoQuest/Getty Images

In a 1988 letter published in The New York Times, Geraldine Ferraro wrote, "I am the first to admit that were I not a woman, I would not have been the vice-presidential nominee" [source: Martin]. Four years prior, the Democratic Party had selected the former assistant district attorney from Queens as running mate for Walter Mondale in the 1984 U.S. presidential election. It was the first time a woman representing a major political party had ever landed on the ticket. Her selection was interpreted by many as a way to court women at the polls, but her liberal stances on abortion and support of the Equal Rights Amendment also turned off more conservative voters, male and female alike [source: Martin].

Fighting an uphill battle against popular incumbent President Ronald Reagan and George H.W. Bush, the Mondale-Ferraro team received intensive media buzz, but the novelty of a potential female vice president wasn't enough to carry the Democrats to election victory. The Republican Party easily won the election, snagging every state except Minnesota in a statistical landslide that rivaled only President Franklin D. Roosevelt's runaway reelection win in 1936 [source: Associated Press]. Nevertheless, Ferraro was hailed as a trailblazer even in defeat, symbolizing women's potential to lead in American politics. She died in 2011.