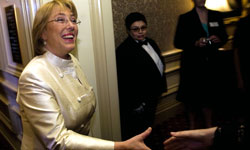 Like Liberia's Ellen Johnson Sirleaf, who was exiled from her home country by a military dictatorship, Michelle Bachelet was forced to leave Chile in 1975 after first being imprisoned and tortured by Augustine Pinochet's military regime [source: Encyclopædia Britannica]. After returning to Chile four years later, Bachelet got involved with the Socialist Party and in 2002 was appointed the country's first female minister of defense. During the 2006 election, the Socialist Party tapped Bachelet to run as its presidential candidate, and the divorced mother of three narrowly won and became the first female president in Chilean history. Deftly steering the nation through the international financial recession in 2008, Bachelet also earned kudos for her government's investment in improving early childhood education and assistance to low-income families [source: UN Women].

When her term wrapped up in 2010, Bachelet transitioned from national to global politics as executive director of the newly formed UN Women, which seeks to spread gender equity and empowerment for women around the world. Bachelet's longstanding desire to enfranchise others through her work was reflected in her presidential victory speech, in which she said, "Because I was the victim of hatred, I have dedicated my life to reverse that hatred and turn it into understanding, tolerance and -- why not say it -- into love" [source: Gallardo]. She was re-elected president of Chile in 2013.