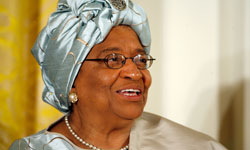 Ellen Johnson Sirleaf was awarded the Nobel Peace Prize in 2011 for her efforts to stabilize Liberia after decades of civil war and government corruption.
Chip Somodevilla/Getty Images

When the Harvard-educated Ellen Johnson Sirleaf delivered her presidential inauguration address in 2005, she told the crowd of Liberian supporters and international dignitaries that her six-year term would mark a "fundamental break" with the past [source: Associated Press]. And she wasn't just referring to the fact that she had just become not only Liberia's first female president but also the first female head of state in all of Africa. Following decades of military coups, civil war and violence -- largely led by former Liberian dictator Charles Taylor -- Sirleaf vowed to put an end to deep-seated government corruption that had left Africa's oldest republic in disarray for so long.

The very fact that Sirleaf survived to participate in that monumental election in 2005 was miraculous, as well. In 1980, while serving as the nation's finance minister, a military coup forced her into exile, but she was saved from the mass execution of the government's other pre-coup executive cabinet members [source: Associated Press]. In recognition of her efforts to repair the war-torn nation, Sirleaf received a Nobel Peace Prize in 2011 [source: Ford].