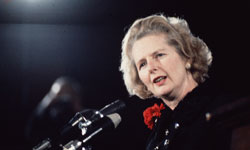 The daughter of a grocer, Britain's Margaret Thatcher studied chemistry at Oxford University, where her political interests were stoked by her participation in the student-led Conservative Association [source: Margaret Thatcher Foundation]. In 1950, the 25-year-old Thatcher became the youngest woman in England's history to run for parliamentary office. The future "Iron Lady" lost the election, but her campaigning helped cement her role in the Conservative Party, and she won a seat in Parliament in 1959. From there, Thatcher's political star began to rise, and she became Britain's first female prime minister when the Conservative Party beat out the competing Labor Party in the May 1979 general election.

Over her three terms as prime minister, the diplomatic Cold War with the former Soviet Union would be the most significant battle that Thatcher's government would face, but the country also became militarily engaged in the 1982 Falkland's War. The Falklands Islands off the coast of Argentina are a British territory, and Thatcher declared war on Argentina following an invasion attempting to overthrow the foreign rule. After only three months, Thatcher and the British government declared victory.

In 1990, following public protests against a new tax she sought to levy, Thatcher resigned from office in order to prevent her Conservative Party from losing votes in the upcoming election [source: Biography.com]. She was given a life peerage in 1992 and known as Baroness Thatcher. After a series of strokes, she died in 2013.