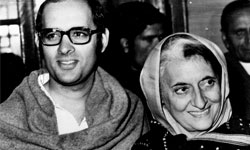 Even before she became prime minister of India, Indira Gandhi seemed to value her burgeoning political career -- facilitated by her then-prime minister father, Jawaharlal Nehru -- over preserving her marriage. In March 1942, the 24-year-old got hitched to Feroze Gandhi and had two sons with him, Rajiv and Sanjay, in the following four years. But the union deteriorated as she devoted a majority of her time to assisting her widower father, who had become India's first prime minister after the nation declared its independence from Great Britain in 1947 [source: Charlton]. But even though Gandhi didn't relish the role of wife, she merged her political and maternal roles, grooming her younger son, Sanjay, as her successor and chief political adviser during her three successive terms in office from 1966 to 1977. Soon after she was elected to a fourth term, however, Sanjay died in a 1980 plane crash.

Partly due to such nepotism, Gandhi left behind a muddied legacy when she was assassinated in 1984. Also, in the mid-70s, she postponed elections, imprisoned opponents and restricted civil liberties to thwart the Indian high court from suspending her political participation as punishment for election fraud [source: Encyclopædia Britannica]. The night before she was shot and killed, Gandhi prophetically told a crowd "If I die today, every drop of my blood will invigorate the nation" [source: BBC]. Her eldest son, Rajiv Gandhi, was then overwhelmingly voted into office, as his mother would've wished.