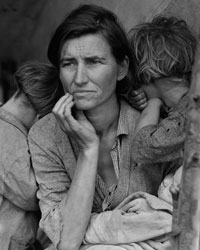 In 1936, Florence Owens Thompson unwittingly became the face of the Great Depression. That's when photographer Dorothea Lange snapped the black-and-white picture of a worried-looking Thompson and handed it over to the San Francisco News. Working for the U.S. government's Resettlement Administration that was formed to assist migrant farm workers, Lange encountered Thompson and her destitute family at a pea picker encampment in Nipomo, Calif. News wires quickly began republishing the iconic portrait, later entitled "Migrant Mother," as an illustration of the severe poverty that had left Thompson and other Americans on the brink of starvation. In Lange's field notes, she said that Thompson and her family were "living on frozen vegetables from the surrounding fields, and birds that the children killed" [source: Library of Congress].

Lange failed to get the woman's name, and it wasn't until 1975 that Florence Owens Thompson publicly identified herself. Four years later, photographer Bill Ganzel tracked down Thompson and her three daughters also shown in "Migrant Mother" and recaptured family that had barely survived the Great Depression, grown up and plump with no trace of Depression poverty and starvation in their aging figures. Although Thompson never reaped any profits from the picture, the federal government delivered 22,000 pounds (9,979 kilograms) of food to the pea picker encampment soon after its publication in 1936 [source: Maksel].