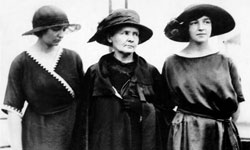 Ève Curie Labouisse didn't see her mother much at home while she was growing up [source: Fox]. And that's not surprising, since Marie Curie was fast on her way toward earning the 1911 Nobel Prize in Chemistry, an honor she received when her younger daughter, Ève, was 7 years old. Of course, that wasn't the only Nobel that the Polish physicist brought home. In 1903, Curie shared the Nobel Prize for Physics with her husband Pierre, with whom she isolated the radioactive isotopes polonium and radium.

After Pierre was struck and killed by a horse-drawn wagon in 1906, Curie devoted more of her time to researching radioactivity than to rearing Ève and her older sister Irène, but her career clearly made an impression on both daughters. Although Ève Curie pursued liberal arts, rather than science, she published a best-selling biography of her mother in 1943. Irène Curie's adult life largely mirrored her famous mother's: The elder daughter studied radioactivity alongside Marie Curie and shared a Nobel Prize in Physics with her husband, Frédéric Joliot, in 1935 [source: Nobel Prize]. Both Marie and Irène also died of leukemia, which some suspect was a result of their laboratory interactions with radioactive materials [source: Fox].