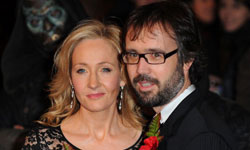 Since penning the first "Harry Potter" novel as a single mother, J.K. Rowling remarried and has had two more children.
Ferdaus Shamim/Getty Images

British author J.K. Rowling's one major regret regarding her wildly popular "Harry Potter" series: not telling her mother about the fantastical books that she began writing in 1990 [source: Celizic]. Rowling's mother died of multiple sclerosis before "Harry Potter and the Philosopher's Stone" was published in 1997, and the loss compelled Rowling to continue crafting the whimsical world of Hogwarts and wizardry while battling clinical depression and facing dire financial straits as a single mother. Her persistence clearly paid off -- big time. Finally completing the seventh and final volume, "Harry Potter and the Deathly Hallows," in 2007, Rowling became the "first female billionaire novelist," as reported by Forbes magazine in 2011 [source: Forbes].

In 2001, Rowling remarried and later gave birth to two more children, but she didn't forget her bleak period in the early 1990s as a struggling single mom. In a 2010 column for the Times of London entitled "Single Mother's Manifesto," Rowling praised Britain's child welfare system that served as a "safety net" until Harry Potter waved his magic wand of fortune on her and her daughter Jessica's lives [source: Fisher].

Famous moms are everywhere these days, it seems. Celebrity tabloids love little more than baby bumps and bassinets, but those weren't the types of famous mamas I wanted to highlight in 10 Famous Mothers. Sure, Angelina Jolie and her multi-ethnic adopted brood make for fascinating pop culture fodder, but how many people have heard about Josephine Baker and her "Rainbow Tribe," whom Jolie and her clan have been compared to? Chances are, not many.

Moreover, since mothers are often described merely in terms of their children and parenting, I also wanted to call out women who managed to accomplish incredible things -- earning two Nobel Prizes, for instance -- while raising kids on the home front. Certainly, fulfilling their maternal responsibilities wasn't always easy for the 10 women I selected, but their challenges are also a comforting reminder that even when it seems like somebody has it all, being a mother can be the toughest job of all.